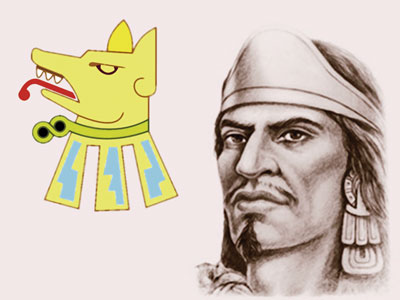 Nezahualcoyotl was born about a century before Cortés’ conquest, the heir-apparent to the city-state of Texcoco, on the eastern side of the lake by the same name. However, when he was fifteen, he witnessed his father, the king, murdered by an invading tribe, and spent the next decade in precarious exile (saved on more than one occasion by one of his subjects offering to die in his stead—he was that beloved).

A decade later, leading a coalition he’d formed of more than 100,000 soldiers, Nezahualcoyotl defeated the invaders and claimed his rightful throne. Soon, he enabled Texcoco to co-rule most of central Mexico as part of the Triple Alliance (led by the Aztecs of Tenochtitlán).

Nezahualcoyotl ushered in the Golden Age of Texcoco, making it into what one historian called “The Athens of the Western World.” He surrounded himself with gifted philosophers, artists, sculptors, architects, poets and musicians, although he may have been the greatest of them all. He was most famous for instituting an exemplary code of law, which he enforced strictly (executing even four of his sons for having relations with his concubines) and which included governmental separation of powers.

Although he promoted religious freedom, Nezahualcoyotl came to believe in one “unknown, unknowable lord of everywhere.” He built an empty temple to honor this god, and worshipped him/her, not with the traditional human sacrifice, but with incense and fasting.

Nezahualcoyotl died leaving behind as many as 110 children, and poetry which we continue to enjoy today—a window into his worldview and soul.

I love the song of the mockingbird,

I love the color of jade

and the enervating scent of the flowers.

But I love most my brother, man.

Dance and celebrate the mighty God.

Let us enjoy this glory

because human life is fleeting.

Perhaps in vain we come to live,

to sprout on the Earth.

Let us at least leave flowers.

Today, streets and a city in the state of Mexico bear Nezahualcoyotl’s name, and his visage graces the 100 peso note.

This is a selection from my book-in-progress, Niños Héroes: The Fascinating Stories Behind Mexican Street Names.

I just retired in January after 36 years in education. My partner and I live in La Cristina. We volunteer at Lucky Dog and SOS Chapala Dog Rescue.