We want to congratulate you for looking into Mexico's largest North American retirement community. As pioneers in real estate (1st one lakeside) and the publishing business, we have introduced many to our local idyllic scene. We feel this is what we do best, showing you what graceful and carefree retirement is all about. Let us share with you our excitement and knowledge on the lake area. Be among the many that have already begun a new and enjoyable life.

This area is known as “Lakeside” to residents from the U.S., Canada, Great Britain and Europe, among other places, and “la ribera” to Mexicans.  Due partly to the eclectic mixture, it has developed a continental Old World charm which blends smoothly with a distinctly Mexican ambiance.

Cobblestone streets, tile-roofed homes, riotously colorful gardens blooming year around, and incredible open-air markets and restaurants are common sights, backdropped by lush green mountains surrounding the lake. The hills are laced with flowering trees and plants, and accented by waterfalls, caves, petroglyphs, indigenous sacred sites, and a variety of hiking trails and places to explore.

Over 10,000 retirees call lakeside their home, call us, we can show you around!

Lake  Chapala, the largest in the Mexican Republic, with 1112 km².The climate of the lagoon is tempered with rains in summer. The rains appear between the months of June and October. The coldest periods are from December to February. Most months it's a wonderful climate.A combination of tropical location, high altitude and a large body of water, produce a climate in the Lake Chapala area that is one of the best in the world.

Other prime retirement locations cannot come close to matching the climate in the Lake Chapala area.  High humidity, searing summer heat, hurricane and tornado threats and miserable winters are all foreign to the lakeside.  Temperatures are consistent year round.  The sun shines all day almost every day.  Consistently low humidity adds to the comfort level.  The wind is very gentle or non-existent.  Sunrises and sunsets vary only about an hour from winter to summer. 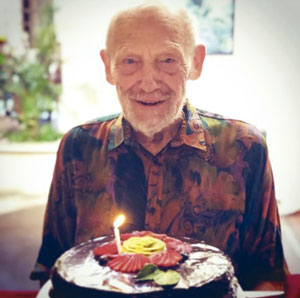 CELEBRATING THE NINETIES!!!!!  EVERYONE INVITED.

Dean Niles is celebrating his 90th Birthday Celebration on Sunday, April 19th. at 1-5

The party house is on the corner of Guadalupe Victoria and Juan Alvarez, which is the street just west of El Torito and the Ajijic Tiangus Street. (There will be balloons and a sign marking the house.) If you turn onto Juan Alvarez from the Carretera, go one block to the circle with the water tower and the party house is on the corner on your left.

There will be steamed tacos and punch, but guests are asked to bring a dish, chips or appetizer to share and a bottle if they wish. Entertainment will feature a dance on the trampoline by Dean, whom many will remember as a yoga instructor of great acclaim! This year also marks his 25th year living lakeside.

Open plan, extra large and high-ceilinged living room/dining room with fireplace flows to large entertaining terrace with several seating areas and awnings, fountain and fire place. South and West-facing views are truly spectacular. The North-East side of the living area connects via sliding doors to a completely private separate pool (with fountain)) area with full bar, grill, smoker, and covered seating area. The renovated modern kitchen, also with lovely views and two exposures, connects to both the dining and pool areas. A full guest bath, two bedrooms (with fireplace) and two bathrooms complete the main floor.

"The Place Where the Water Springs Forth"

Ajijic is situated on a narrow strip of land between the mountains to the north and the Lake to the South. It is flanked by San Antonio Tlayacapan to the east and San Juan Cosala to the west. It is seven kilometers west of Chapala. Its average annual temperature is 19.9 degrees Centigrade "68F".

In 1522, the Spanish Olid Expedition reached the eastern shores of what is today called Lake Chapala. When it arrived, its leader, Captain Avalos, met with little resistance. A royal grant from the king of Spain gave joint ownership of the area to Avalos, who was a cousin of Hernan Cortez. Soon other cousins arrived, and one of them by the name of Saenz acquired almost all of the land that is now Ajijic.

By 1530, the Saenz property was one huge hacienda. The principal crop was mezcal, which was used in the making of tequila. The hills were covered with mezcal plants. Coffee and corn were also planted. Later, when a tequila distillery was built, the beverage was shipped, along with the coffee, back to Spain.

HOMES FOR SALE IN AJIJIC

Chapala is located on the north shore of Lake Chapala, 26 km. (16 mi.) east of the Lake's western end, and 42 km. (25 mi.) south of Guadalajara. It is the oldest, most populated, and the most easterly of a string of villages - Chapala, San Antonio Tlayacapan, Ajijic, San Juan Cosala and Jocopetec - known locally as Lakeside.Its altitude is 1530 meters (5020 feet). Its average temperature is 19.9 degrees C (68 degrees F).

Founded in 1538, the town probably took its name from Chapalac, one of its earliest Indian chiefs. Or perhaps it came from the Mexican "Chapatla," the "place where pots abound," referring to the primitive Indian practice of appeasing the gods by throwing pots, spotted with blood from earlobes, into Lake Chapala.

HOMES FOR SALE IN CHAPALA