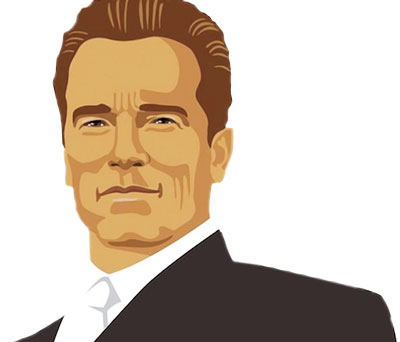 More recently, before becoming president, Donald Trump was, among other things, the host of his own reality TV show, “The Apprentice.” He also milked guest appearances on “60 Minutes,” “The View,” and late-night talk shows as if they were cows.

Therefore, I recently found myself wondering what a presidential cabinet would look and sound like if it, too, came from Hollywood. But, instead of filling the cabinet with actors, I’ve imagined it with the characters they played. Perhaps it would look like this:

The president rises from his director’s chair at the end of the table. “The issue with the Chinese continues unresolved,” he begins. “We must find a solution before we leave. Secretary of Agriculture Lisa Douglas, from “Green Acres,” where do you stand on Red China?”

“Vel, dahlink, I am oppost to red china. I vill not sit down at a table vit red china. Eet must be a neutral shade. Off-white, maybe. Vot do you tink, Secretary of Commerce Gordon Gecko?”

“Green! Green is good,” Gecko answers. “ It’s the color of money. You can’t have too much money. And greed is good. What do you think, Secretary Potter? You come from Bedford Falls, where people live a wonderful life.”

“Wonderful? Yes, if you like red bricks. They’re everywhere,” Secretary of Housing and Urban Affairs Potter grumbles. “They cover Bailey Brothers Building and Loan. They’re at Martini’s Bar. Even the ornaments on George Bailey’s Christmas tree are that damn red color.” His tone lightens. He smiles. “But green? Yes. Green. It’s a wonderful color.

Secretary of Defense Mr. T punches the air. “I pity da fool who wants green. I’m for a neutral color. Maybe a light gray. Yeah. I’m on the gray team.”

The president points at Potter. “There were red bricks in Bedford Falls? I thought it was all black and white. But we’re not talking about red bricks. We’re discussing Red China.”

“No, Secretary Douglas, it wasn’t a sheet cake,” Minny Jackson giggles. A tablespoon of evil runs through her laugh. “They thought it was a normal chocolate pie, but it was a pie made of shi—”

“And that is why she is the Secretary of State,” the president interrupts. The cabinet laughs, halting the discussion.

An impatient Secretary of Homeland Security Barney Fife cuts short the levity. “What’s it gonna be? Red? Or green. Or neutral. Hmm? Hmm? Chop chop. I don’t have all day. I have a country to keep secure. Right, Andy?”

Doogie Houser, M.D., Secretary of Health and Human Services, looks up. “Who’s Andy? And why are you so nervous?” His adolescent voice cracks on his final word.

“Wait!” The stern yet warm voice of Attorney General Atticus Finch fills the room. “Are we talking about Red China or red china? Because if we are discussing plate ware, we can’t be biased. We can’t treat the colored ones any different than the white ones. That wouldn’t be fair or just.” Finch pauses and taps his pipe on the table. “I’m curious what you think.” He peered at the diminutive Secretary of Labor? “What should I call you, sir? Charlie Chaplain or the Little Tramp? Gosh, your work in the masterpiece “Modern Times” certainly qualifies you to head the Department of Labor.”

The Secretary of Labor shrugs his shoulders, shuffles his feet under his chair, and looks bewildered.

Attorney General Finch looks around the table and continues. “And why are we still calling it Red China? Didn’t we stop doing that decades ago?” The cabinet members gaze around the room in silence, puzzled by the question.

Breaking the awkward silence, Secretary of Energy Alvy Singer blurts, “My ex-girlfriend Annie Hall and I cooked lobster once. Yeah. Lobster. Oy, was that an ordeal! The pot. The bibs. The boiling. My shrieking. Anyway, I’m sure she served it on gray Chinet. And my mother used Chinet. She served gefilte fish, latkes, kreplach, everything on it. She would only use the red china for the Passover seder. ‘You don’t deserve the good china every day,’ she’d say.” Singer’s posture sags “And you wonder why I’m so insecure. You have no idea the mother-baggage I carry. It could fill an airport carousel.” He pounds the table with a fist. Frightened by the unexpected noise, Secretary of Labor Chaplin/Little Tramp tumbles from his chair. “So, if Chinet is good enough for Annie Hall, my mother, and a lobster, it should be good enough for our visitors from Red China. I mean China, I guess.”

The president raises his hand. “OK, then,” he says. “I’ve listened to your input and made a decision. Chinet it will be. Some red. Some green. Some off-white. Maybe a few gray. Now, what about the wine? Red?”