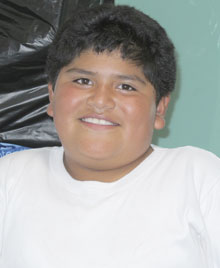 Rogelio and his family live in Potrerillos, Jocotopec. Mom, Ana Sofia Huerta Verdia and dad, Reyes Lara Ornelas brought Rogelio to Niños Incapacitados in May of 2011 at which time they were accepted into our program.

Ana Sofia told us that in February, Rogelio had to be rushed to Hospital Civil with severe abdominal pains.  Upon arrival at the hospital, it was noted that he had a very high fever.  Emergency would later diagnose him as having appendicitis.

Doctors performed an appendectomy under general anesthesia and found he had a perforated intestine.  This is known as a Burst Appendix, which can be fatal if not attended to quickly.  Although the exact causes of a burst appendix are not completely understood, the appendix becomes blocked and eventually becomes inflamed and ruptures. When this happens, it leaks bacteria from the intestines into the abdominal cavity. This causes an abscess known as peritonitis.

Burst appendix symptoms are much the same as appendicitis but the intensity of the symptoms is far more severe. Rogelio had been in pain and vomiting for a couple of days but his mom thought he had eaten something that did not agree with him. On the third day the pain became excruciating and, coupled with the vomiting, this could have been a life threatening condition for Rogelio.

Because the intestine was compromised, Rogelio was fitted with a drainage tube to help remove the contaminates from his body. He was also placed on intravenous fluids with various antibiotics to help combat any infections. Rogelio’s condition was delicate to say the least and he would remain in hospital for two weeks.

Upon his release from hospital, Rogelio was outfitted with a colonoscopy bag and put on numerous antibiotics to ensure he did not develop any infections. He was given a very strict diet, which he was not too happy about, as he would not be allowed sugars, salt and spices. All the things he loved.    Mom had been instructed on how to wash and evacuate the bag to avoid contamination. The doctors also advised Rogelio that he could not run for the next three to six months and definitely no sports. Easier said than done for a boy of ten! Rogelio just smiles and says he is okay with that as long as the pain does not come back.

To date, Niños Incapacitados has reimbursed the family for the colonoscopy bags and supplies totaling 3500 pesos. At the moment, the hospital is providing the family with the daily medications required. Rogelio will need surgery to close the drain hole and if all goes well, he should be back to normal.  In the meantime, he is monitored closely.  Every two weeks he returns to Hospital Civil for blood work and a series of special tests and x-rays. All monies reimbursed to families by Niños Incapacitados must be signed for. Rogelio takes great pride in being able to sign for mom.

Just a reminder that the monthly meetings for Niños Incapacitados will resume September 8, 2011 at the Real de Chapala Hotel in La Floresta, starting with coffee at 10:00 a.m.  We invite you to come and meet another one of the children we are helping.