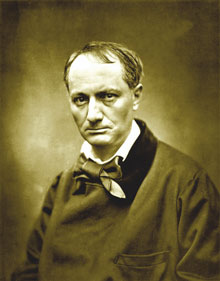 Alert readers of this column know that the Classic Poets I’ve featured are near synonymous with their respective countries:  Yeats/Ireland; Lord Byron/England; Pushkin/Russia; Goethe/Germany; Dante/Italy; _______/France?

Yes, who best represents France? Let’s see if we can put a face on Belle France. You’ve got Victor Hugo, a poet, yes, but more famous for Les Miserables and The Hunchback; Paul Verlaine “What have you done, you there/Weeping without cease,/Tell me, yes  you, what have you done/With all your youth?”  Arthur Rimbaud “One must be absolutely modern.”  Stephane Mallarme “The flesh is sad, alas, and I have read all the books.” Pierre De Ronsard “Now fearfulness, and now hopefulness/Pitch camp in every part of my heart.” Voltaire, of course, but more the philosopher and wit “A witty saying proves nothing.”

No, I’m voting for Charles Baudelaire, a truly transformative character who changed the way we think and can still bring us up short some 160 years later: “God is the only being who, in order to reign, doesn’t even need to exist.”  “It’s time to get drunk! So as not to be the martyred slaves of Time, get drunk without stopping! On wine, on poetry, or on virtue, as you wish.” “If the poet has pursued a moral objective, he has diminished his poetic force.”

Sooner or later now the hour must be

When Hazard, Virtue (your still-Virgin mate),

Repentance(your last refuge), or all three—

Will tell you “Die, old Coward, it’s too late!”

Not too much diminution of poetic force there, I’d say. Baudelaire’s take on life and love was decidedly different.  Dark, introspective, his poetry represents a transition between a naive Romanticism (often rural) and the intense self-consciousness that foreshadows Modern Poetry, which, whether we like it or not, is here to stay.  Blasphemy and explicit sexual references set in urban landscapes both beautiful and decayed characterize much of his most famous work, Les Fleurs du mal (The Flowers of Evil, 1857). Of course, it was so scandalous that he was prosecuted along with his publisher in Paris. It’s little wonder he was in thrall to Edgar Allen Poe and translated his works into French—translations that still stand strong today.

But the following excerpt will give us a flavor of The Flowers of Evil:

When, on a certain day, into this harassed world
The Poet, by decree of the high powers, was born,
His mother, overwhelmed by shame and fury, hurled
These blasphemies at God, clenching her fists in scorn:

“Would I had whelped a knot of vipers — at the worst
‘Twere better than this runt that whines and snivels there!
Oh, cursèd be that night of pleasure, thrice accurst
My womb, that has conceived and nourished my despair!

“Since, of all mortal women, it would seem my fate
To be my saddened husband’s horror and disgust;
And since I may not toss this monster in the grate —
Like any crumpled letter, reeking of stale lust —

Baudelaire’s syphilis finally got the better of him.

You who fill the hearts and eyes of whores
With love of trifles and the cult of sores. B