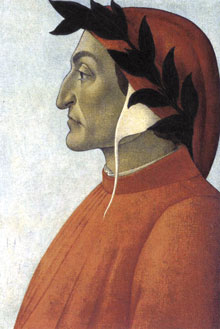 In keeping with my pledge to seek out famous poems that treat of love and death, I offer up this month Dante Alighieri, Italy’s greatest poet, still read diligently nearly seven centuries after his passing. Maria Paola of Ajijic, recalls how students wanting to attend an Italian university had to take a state exam that included passages from The Divine Comedy to be expounded upon.

Of course we know him most for his immortal work, The Divine Comedy (La Divina Commedia) published in Florence 1317-19. Dante knew it only as Commedia. It wasn’t until after his death that the public, during public readings, began referring to it as Divine, ergo, The Divine Comedy. Imagine yourself in such a medieval crowd pushing forward to better hear the presenter in one of Florence’s splendid piazzas and listening to this from Dante’s Inferno:

Here monstrous Cerberus, the ravening beast, howls through his triple throats like a mad dog

over the spirits sunk in that foul paste.

His eyes are red, his beard is greased with phlegm, his belly is swollen, and his hands are claws to rip the wretches and flay and mangle them.

And they, too, howl like dogs in the freezing storm, turning and turning from it as if they thought one naked side could keep the other warm.

“Dante,” said contemporary poet Francesco Petrarch “is the great master of the disgusting.” He could have added: Atheists, you better hope you’re right! The punishment meted out above was just for committing the sin of gluttony, a somewhat understandable failing where Italian food is concerned. Flatterers don’t fare much better, not to mention Opportunists, Wasters, Frauds, Usurers and, of course, the Carnal. If all these sins sound vaguely familiar, they’re more finely tuned and etched in Italian minds because Dante’s poetry is still their pride and joy. Stefano Quaiotti of Ajijic, speaks fondly of his school days in Bologna savoring Dante’s poetry.

Dante’s tour through Hell and Purgatory is made possible by his guide and protector, the Roman poet Virgil who represents human reason, all the better to understand the sins and the sinners. But when it comes to Paradise, Dante requires more than human reason. He needs the sublime company of his lost love, Beatrice, or at least her divine spirit to guide him in the ways of Redemption and Revelation. Beatrice, whom Dante met and fell for when they were only nine. Ten years later, she died tragically, and Dante, bereaved, wrote many love poems to her memory. “O Beatrice, thou gentle guide and dear

Often it is brought home to my mind

the dark quality that Love gives me,

and pity moves me, so that frequently

since Amor assails me suddenly,

so that life almost abandons me:

only a single spirit stays with me,

and that remains because it speaks of you.

I renew my strength, because I wish for help,

come to you, believing it will save me:

and if I lift my eyes to gaze at you

my heart begins to tremble so,

that from my pulse the soul departs.”

Dante considered love for a woman the first step in the soul’s spiritual sojourn toward a capacity for divine love—a Christian vision, nay, a beatific vision of God in His celestial light. Dante Alighieri contracted malaria and died at age 56.