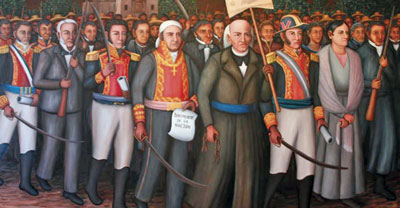 This article should actually be called, “Fun Facts about the Mexican Flag” because the story of the Mexican flag is as complex as the country’s history and, in this case history is fun. Research for this article felt a little like the Big Bang vexillology (study of flags) episode where Sheldon talks about Fun Facts with Flags. Recorded use of flags, as opposed to banners, is first recorded about 1,300 BCE and by the Middle Ages flags were accepted symbols of countries, kings, organizations and guilds. By law all vessels engaged in trans-oceanic trade are required to fly the flag of their national registration; it was this maritime act that saw the introduction of the pirate symbol of the skull with cross bones.

The history of the Mexican flag is a bit like the story of the country, complex and multi-layered. The version of the Mexican flag that we see displayed today on all public buildings and proudly carried during civic and national holidays, was designed for the 1968 Olympic Games held in Mexico City. However, this version was not ratified by congress until 1995 or, 27 years after the games. There are sixteen countries that utilize the green, white and red colors on their national flags. Those of Mexico are placed vertically while in the center of the white band we all recognize the Mexican Eagle clutching a snake in its talons. This Mexican symbol also underwent a metamorphous before today’s version. During the 1810-1821 struggle for independence from Spain the Virgin of Guadalupe was displayed by the Catholic priest, Miguel Hidalgo, who is acknowledged as the father of Mexico’s struggle for independence. He used the symbol as the rallying symbol for the people of Mexico; although the Virgin will always be a recognized representation of the Mexican people, it is both too complex and somehow less appropriate as a national flag on the international stage. The colors of green, white and red on Mexico’s national flag have remained the same since being adapted in 1821. However, the symbolism of these colors has changed.

In 1821 the color green represented independence. Today this color symbolizes hope for the nation. While white originally was the symbol of purity for the Roman Catholic faith, today white portrays the unity of all Mexican citizens. Red was for the union of all Mexicans and the Three Guarantees of the Iguala Doctrine, which incidentally was signed in Tlaquepaque. Currently red represents the blood of those who died fighting for their country. During the 1810 Revolution, Mexicans rallied around the banner of The Virgin of Guadalupe. In 1821 the Mexican government adopted the tri colors of green, white and red arranged diagonally with a gold star in the center. This flag was called the Flag of the Three Guarantees. Simultaneously in 1821 the Mexican Empire used a slightly more complicated green, white and red flag with a green star in the center of the white stripe. The stripes were vertical, just as they are today. Then this was changed for the Mexican Empire with a red star and crown in the center in the lower right corner. This second flag of the Empire was used from 1821 through 1823 and for the first time we see the eagle on a cactus clutching a rattlesnake in its talons. However, the eagle was a European eagle, the Mexican eagle was first portrayed on the 1934 flag.  The 1823–1864 variant shows the eagle perched on the cactus with the laurels underneath and for the first time a snake is in his sharp beak. This flag was briefly replaced by the Flag of the Second Mexican Empire, 1864-1867, which is the most elaborate of the Mexican flags. The 1893-1916 flag has a simple eagle with outstretched wings. 1916-1934, the eagle is more filled in and less of a European version; also, both the laurels and the oak leaves are fuller and “tied” with the tri colored ribbon of green, white and red. 1934-1968, saw the now easily recognized Mexican Eagle and snake encircled within a corona of oak leaves. The laurel leaves were added in 1968 in honor of the Olympic Games. The laurel leaves represent victory and prosperity and to awaken spirituality and achievements, while the oak leaves are used as a symbol of the valor of the Mexican people. The 1984 eagle is also depicted on the reverse side and faces right. The Mexican Congress of 1995 stated, “When the National Arms is reproduced on the reverse side of the National flag, the Mexican Eagle will appear standing on its right talon, holding with the left one and the beak the curved serpent.” The president’s flag may have gold laurels instead of green-brown. The symbolism of the eagle devouring the snake is based on the Aztec symbol for Tenochtitlan, now Mexico City. According to Aztec history it was prophesized that the wandering Aztec would see a regal eagle perched atop a cactus devouring a rattlesnake and that was where they were to construct their city, which became the Aztec Empire. This became an issue because when a priest finally spotted this omen, the eagle was perched on a cactus devouring the snake, as foretold. However, this occurred on a small barren island in a lake. Eventually the Aztecs did construct their principal city in this lake dotted with many small islands which the Aztec linked with easily defensible stone bridges. The legend became the basis for the Aztec Empire and the reminder can be seen on today’s Mexican flag.

It is hard to contemplate how this prophesy of a wandering tribe came to dominate the other already established civilizations of Mexico and then evolve into the Mexico we know today. A player on the international stage of economics, entertainment, robotics, agriculture with a diverse domestic population and international trade and yet, somehow united under the banner of a distinctive flag featuring an eagle devouring a serpent. Although there are sixteen countries with green, white and red stripes it is the Mexican bandera that we all recognize with its Mexican eagle, snake and cactus. At this time of year, we see vendors outside local businesses and in our plazas selling Mexican flags of all sizes from small lapel pins to larger flags to be draped from one’s balcony or displayed on a flag pole. Cars parade along the carretera with small Mexican flags stiff from the breeze while many local businesses proudly fly a green, white and red bandera de Mexico at the entrance to their establishment.

September 16th is the celebration of Mexico’s Independence from Spain and although due to COVID there will be no “Grito” from local representatives there will be Mexican flags of all sizes being sold. These past eighteen months have been ruinous for independent businesses so, please buy a Bandera de Mexico and proudly wear your pin or display your Mexican flag in support of Mexico and in solidarity that things will eventually get better. It took ten years of fighting for the citizens of Mexico to gain their independence from Spain and even longer for the Mexican flag to evolve, but today we can support our neighbors with a small purchase and with the knowledge of the history of the beautiful and distinctive Mexican Flag. Knowing these fun flag facts we can all shout, “Viva Mexico.”