Caretaking Will Bring You Down to the Level of Your Incompetence 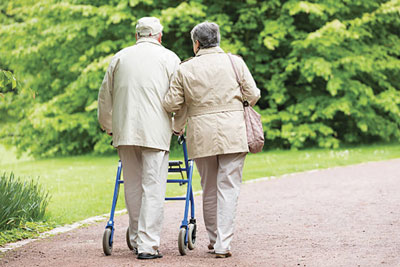 When my husband had his first stroke, after being diagnosed with MADSAM (Multi-focal Acquired Sensory and Motor Neuropathy) he went into a hospital rehabilitation unit. Their job was to strengthen his body and resolve the minor facial ticks that resulted from the stroke.

At this time, he could still walk with the aid of a rollator (a walker with a seat attached) and he would go round and round the halls of the rehab unit delighted that his face was not paralyzed.

When I had entered the intensive care unit, having flown in from Mexico, that was his first question … “How’s my face?” I can’t blame him as he was a very handsome man and had jokingly talked about how tall handsome men were automatically assumed to be smarter, got the good jobs and the best girlfriends.

He also had great comic timing and had a gift for communication that allowed him to talk to anyone, anywhere. Sometimes that extended to scary situations. Once we were in an airport waiting for our plane when he struck up a conversation with an obviously psychotic man. It took me 15 minutes to drag him away from the man who was carrying on a conversation with about how certain cultures bury their dead. As he walked away, he kept marveling at how unique the man’s observations were.

He was in the rehab unit for a week. His nurse, on the day he was checking out, said, “Make him do whatever he can by himself, don’t do it for him, you will cripple him more”. And from that day forward until he died 10 years later, I held that line. But still I couldn’t avoid the burnout of caretaking.

Caretaking will ultimately bring you down to your level of incompetence. Stress, too much responsibility, the daily lurking of death nearby, watching as one or another muscle or skill set or mind disappears, all take a toll on your energy and on your confidence.

I was lucky in one way, the nurses had impressed him with his need to continue to try to solve his disability problems on his own. Always having been a catalog shopper, he scoured many catalogs looking for the perfect pillow that would allow him to spend all day sitting in his scooter in comfort. I now have 10 pillows of all configurations piled on an old office chair to sell in a consignment shop. He bought silverware with fat handles that let him grip more securely. He had two back brushes but ultimately sourced one for petting the cat when it didn’t do what he wanted for his back. He bought a device whose rubber legs affixed it to the shower floor so he could wash his feet on his own.

He had me buy him a seat that raised the toilet 6 inches so he could go to the bathroom by driving his in-house scooter up next to the toilet. He solved his soap gripping problem by buying soap on a rope, or encasing the bar in a net bag to increase his grasp.

But his most ingenious device was a green plastic clothespin. He would affix it to the middle front of his T-shirt, pull on his Bermuda shorts, and then clip the waistband of the shorts to the green pin. Then he would use both hands on the handlebars of his scooter to slowly pull himself upright. And magically the shorts would rise into place without him losing his balance.

Doing all these things on his own kept a great deal of pressure off me but still the details of keeping a Mexican house and car running, doing all the driving and buying until he couldn’t go in the car without an aide as well as attending to the details of a Connecticut property with seven rental units and a property manager plus handyman, to manage and pay bills through my ebank account were trying. I obtained the mortgages, gathered and listed the deductions for the accountant, went to the bank for money, and was the general business head. This was a lot to keep track of in my head but I am not plagued by the lack of knowledge and inexperience that plague many widows.

Chuck did other things for me. He started the dishwasher, glued broken things back together, and sharpened knives. This may not seem like a lot until you have to learn to do it yourself when the partner dies. Once during a really stressful week, I told him, I could not do ONE more thing for us, that he would have to step up…and he did. He rode his scooter to the fruit and vegetable store! I was overcome with gratitude at this simple gesture and for that day, I felt I had my OWN caregiver.

This brings me to a couple of other truths. Every caregiver needs someone to take care of them. And, caregivers find it painfully hard to let others help them. They are fortified in their daily struggles by their belief in their ability to solve every problem that besets their struggling spouse.

When Chuck died, friends called, emailed, and came by to ask how they could help. I said there was nothing for them to do, except maybe bring him back. But I wasn’t eating or sleeping and once when I fell as a result of the tranquillizer I was prescribed, I spent five hours on the floor unable to get up.

I was only saved by friends who took over and called my children to come down from the US and help me. Another friend was like a bulldog. Every day I would get an email. I want to see you. I want to have breakfast. I want to have lunch. Finally, I capitulated and discovered that she had been widowed seven years earlier and could assure me that my crazy reactions were normal grief.

Since I had the unusual reaction of experiencing my brains as falling out such as being unable to remember my step-daughter’s name, or my cellphone password; my children put me in an assisted living facility for a month. It was exactly what I needed. Someone fed me, gave me my meds, and assisted my showers. I could be alone or see people. And the ones who knew Chuck came to visit me and would talk about him. This latter was crucial because talking ABOUT him made it feel like he was present, that he would pull up a chair to the table and listen to the stories about himself. I lost two friends because, though knowing Chuck for twenty years, they changed the subject whenever I brought up my painful feelings or HIM when we went to breakfast. Sad.

Sinking to one’s level of incompetence is critical. You get to the point where you start thinking about yourself first. Your inability to pick them up when they fall. Not having enough strength to help them from scooter to bed. Being overwhelmed by sadness at the power of the disease to steal one more ability or muscle. And thinking about your own inability to cope with the next decline, whether that be a need for oxygen, or IV treatment, or loss of memory. It all gets to be too much and you have to take responsibility for your own inadequacy and get help. Self- awareness falls on your head like a ton of bricks. And none of us are kind to our suffering selves.