The Life And Times Of The Legendary Voyageurs 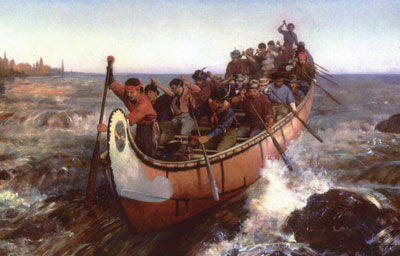 We did not arrive here in this north country Eden by canoe, like the voyageurs of old, but by modern motor vehicle, a five-day drive of over 900 miles from our home near Sandusky, Ohio. The trip was worth it just for the scenery, as the flat farmland of central Michigan gave way to miles of forest and Midwestern hardwoods were replaced by northern conifers. The horizon for miles in any direction was covered by forest.
We headed northward in a driving rainstorm, complete with rolling thunder and brisk west winds. A day later, as we crossed the lengthy Mackinac Bridge spanning the straits between Lakes Michigan and Huron, we were pelted by heavy rain again.

We pass a sign warning “Moose Crossing”. In our travels and our work as National Park Service rangers, we have seen signs alerting us to “Bear Crossing”, “Panther Crossing”, “Rocky Mountain Bighorn Sheep Crossing,” “Elk Crossing,” “Red Wolf Crossing,” but not “Moose Crossing.” Another sign reminds us that we are crossing the 45th parallel, exactly halfway between the North Pole and the Equator.

Passing over the lengthy Mackinac Bridge to Michigan’s Upper Peninsula, is not for the acrophobe. Neither is the high bridge spanning the waterways on our way north from Duluth, Minnesota. Finally, we arrived at the lakeside town of Grand Marais, Minnesota, reminding us for all the world of a quaint little New England fishing village. It was a great place for a late breakfast at the friendly Blue Water Cafe. And, then, finally on to Grand Portage, Minnesota, where my wife LaVon and I, both veteran park rangers, will serve as volunteers at the old fur trading center.

I think of those incredible voyageurs, setting out from Montreal each spring when the ice in the St. Lawrence broke up, their canoes brightly colored, the air reverberating with their songs of Old France.

Their 35 to 40 foot Montreal canoes were manned by a crew of fourteen and could carry up to six tons of trade goods. There were smaller “bastard canoes” with a crew of ten, and 25 foot north canoes and half canoes. All were destined for the Canadian wilderness. The 1500-mile trip would have been arduous, lasting six to eight weeks, the crews paddling along rivers and hugging the shore of the Great Lakes on their way to Grand Portage on the far northwest coast of Lake Superior.

The voyageurs were mostly diminutive, wiry men, standing 5’4” to 5’5”, with tremendous strength and endurance. Whenever they encountered rapids or waterfalls, a portage was necessary. The voyage to Grand Portage required 36 portages. At every portage they would each tote two 90-pound packs and their canoes along sometimes rough, rocky wilderness trails until they reached calmer waters.

The typical attire of a Voyageur consisted of a breech cloth, moccasins, thigh length leather leggings, a belted shirt, colored tobacco pouch and a red cap with a feather.

The voyageur brigades consisted of two categories of men, the pork eaters, who transported trade goods from Montreal to Grand Portage, and the north men or winterers, who then carried those goods inland for hundreds, even thousands of miles. The pork eaters were mostly poor farm boys from Quebec who simply needed a job. They were given their nickname because management fed them mostly pork and corn. Nearly all voyageurs were either French or French-Canadian.

Cash was always in short supply, so voyageurs were paid with credit at company stores for necessities like clothes, tobacco, blankets, needles and thread, shoes, combs, razors, rum, soap and metal cook pots.

They were not sentimental men. Their journals reveal little sense of awe at their surroundings, at the vast forests of towering conifers, the lumbering black bears, herds of deer, caribou and elk, the howls of wolves serenading the heavens beneath the ghostly light of the Aurora Borealis. It was all business, purely and simply, a matter of profit or loss. And yet, it was a lifestyle much loved by these strange hardy men, one that in old age most remembered with joy.

The labor was arduous. Voyageurs paddled from dawn to dusk. The brigade leader’s word was law. Distances were counted in pipes. Whenever the leader called for a break, the voyageurs came to a halt and lit their pipes. At the end of the long, arduous day, the voyageur rolled up in his blanket and slept on the ground. Whenever it rained, unless he could take shelter under an overturned canoe, he got wet.

During the annual rendezvous at Grand Portage, a thousand or so traders might converge to trade and do business. The rum flowed freely, often in the form of Shrub, a mixture of lime and lemon, sugar and rum. Once the rendezvous ended, the center returned to sleep. Perhaps a handful of clerks waited behind until the next rendezvous.

Fortunes were made because of the fur trade. Wars were fought over the spoils. The refusal of Great Britain to relinquish its illegal fur trade posts on US soil at such locations as Michilimackinac was one of the issues triggering the War of 1812.

Rivers were the highways of the fur trade, and voyageurs traveled over them across the American Midwest and western and northern Canada, sometimes all the way to the Great Slave Lake in what is now Canada’s Northwest Territories. The voyageurs dispersed much desired trade goods among isolated trading posts and often traded openly with Native Americans. Trade items included muskets, blankets, colored cloth, tobacco, rum, and numerous metal items, from needles and fish hooks to pots and pans, axes and knives. Fifty percent of the furs desired by voyageurs consisted of beaver pelts.

The entire economy was sustained by human vanity, the obsession of European men for beaver top hats. Anyone who was anyone in London, Paris or other European metropolises craved a beaver hat as a symbol of wealth and prestige.

Because they spend their lives in water, beavers have two layers of fur, the inner one very soft and easily converted to felt from which top hats were made. Beavers readily maneuver in the water but are clumsy on land. By banging on a beaver lodge with a stick or club, trappers drove the startled rodents outside, where they could be pursued and clubbed or speared.

The beaver population was decimated during the 18th and 19th centuries. Between the years 1700 and 1770, the United Kingdom exported 21,000,000 beaver hats. When Europeans first arrived in North America, there were an estimated 120,000,000 beaver ponds scattered over the continent. As tastes in fashion changed and the increasing scarcity of beavers caused furs to be more expensive, the beaver was saved from going the way of the passenger pigeon.
Still, by 1900, there were only an estimated 100,000 beavers left in North America. Today, the population may have increased to approximately 15,000,000. As the number of beavers increases so do the populations of other animals.

The great fur trade center at Grand Portage closed after 1802, when the US and Great Britain agreed that the Canadian border lay seven miles to the north along the Pigeon River. Grand Portage, a British outpost, lay south of that border. Subsequently, the great hall and outbuildings were dismantled and shipped forty miles across Lake Superior to Thunder Bay, Ontario, where they were used to construct Fort William. No one consulted Native Americans about whether they wished to be US or British citizens.