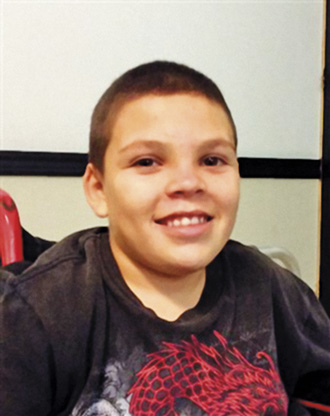 Meet Rodolfo. He was born January 26, 2003 and came to Niños Incapacitados in August 2015. Rodolfo was a normal boy enjoying normal boy things until one morning when he awoke and realized he could not feel his legs. After numerous tests, Doctors diagnosed Transverse Myelitis.
The exact cause of transverse myelitis is not known. The inflammation is thought to be the result of the immune system mistakenly attacking the spinal cord. One thing that is known is transverse myelitis often develops at the same time as, or soon after, a viral bacterial infection.
In some people transverse myelitis can be linked to autoimmune diseases such as lupus, vitamin B12 deficiency, MS, Lyme Disease and some cancers which can cause an autoimmune reaction.
Suffice it to say, Rodolfo is now in a wheelchair and has not had the use of his legs since this happened. We are happy for him that he has not displayed any of the other symptoms which can develop; weakness in his arms, sensory alterations and bowel and bladder dysfunction.
Rodolfo’s treatment plan consists of therapy three times per week and botox treatments three times a year. He is also taking an anti-parkinson medication to help reduce the shakes and an anti-inflammatory. To date we have reimbursed the family $48,000 pesos.
Dad is an inspiration as he himself is disabled having been diagnosed with Dystonia causing muscle contractions throughout his body; however he is diligent about taking Rodolfo weekly for his therapies in Guadalajara.
Thank you for the opportunity of presenting another of our children to you. Remember, we see families at 3 locations, Jocotepec, Ajijic and Chapala. Should you be interested in attending a clinic, please contact Barb Corol (766-5452) for Jocotepec or Nicole Sergent (766-4375) for Ajijic and Chapala.