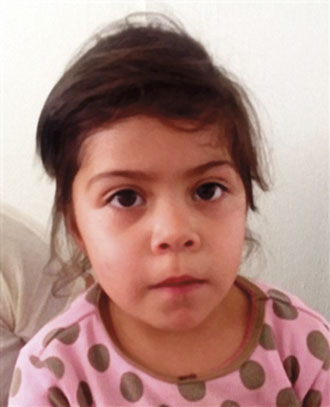 Fatima was born in July 2012 in Chapala.  She came to our clinic in October 2015.  She had difficulty walking. We made an appointment with Dr. Gonzalez as he is the Doctor who examines children for Shriners.

Dr. Gonzalez referred her to the Shriners Doctors in Mexico City who advised that she would need surgery for hip dysplasia on both hips. Her first surgery was in July 2016 and was successful.  She was in a body cast for two months following but was doing well.  Her second surgery took place in December 2016, again in Mexico City.  The body cast was removed in early February 2017 and she is presently awaiting another surgery in December to remove plates and nails.

We are very thankful to the Shriners Organization who help many of our children each year with surgeries and follow up in Mexico City.

We have reimbursed the family a total of 37,199 pesos mostly for transportation to and from Mexico City.

Thank you once again for this opportunity.

I invite you to visit our website at: www.programaninos.com