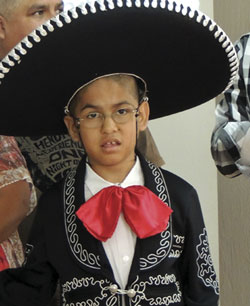 Now 11 years old; has been with niños incapacitados since just after birth —diagnosed by in-utero ultrasound with hydrocephalus—this used to be called “water on the brain,” but actually is not water but spinal fluid that is supposed to circulate through the brain and exit via small reservoirs at the base of the brain.  Cerebral spinal fluid acts as a “cushion” for brain tissue, delivers nutrients to the brain and removes waste, and acts as a monitor for the amount of blood flowing in to the brain.  Anything that impedes this function causes a bit of havoc.

Juanito was delivered by cesarean section and one month later had a drainage shunt placed in his skull due to an infection plus as a conduit for removal of the excess spinal fluid. He began suffering convulsions almost right away and was placed on valproic acid and fenobarital.

He continues to this day on the Valproic Acid medication. Convulsions at times fewer, at times more severe, but each time Juanito comes through.  In 2011 his shunt became clogged (also too small with the child’s growth) and had to be replaced.  There were some very “iffy” days thereafter as to if the new valve would “take.” ---various ‘ups’ and ‘downs’ over the years, but with his parents’ support, our support, the hospital’s support and care, Juanito is here today.

We have seen such improvement in the last year or so.  Juanito didn’t speak or pay attention to those around him; he wasn’t able to walk well on his own.  One reason for this improvement was his being able to go to Equine Therapy (Pasos Milagrosos), where Juanito really thrived on horseback.   “His” horse was named “Chocolate.”

Wonderful! Parental support!!  Dad works at Wal-Mart (“we” got him the job with a good recommendation). Juanito may not ever be “normal” and able to live on his own, but the joy he has given his parents and family (and us), can’t be taken away.

Since starting with Niños Incapacitados we have spent 135,000 + for Juanito’s care.  He is but one example of the children we help; some of whom require even more funds than he.  So------ the purpose of all of this is to underscore the fact that all medical expenses are increasing, just as cost of living is increasing in this country….and to show that we need continuing and increased support for our effort

We who are part of this organization believe it is money well spent.