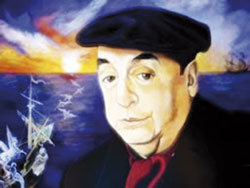 History makes it perfectly clear that totalitarian regimes on the far Left or the far Right abhor intellectuals. And they certainly don’t like poets unless they become apologists for the regime, like fascist Ezra Pound.  Russia of course provides many examples of poet persecution. Pushkin, Akhmatova, Brodsky, Pasternak, et al.  In China, the so-called Misty Poets were exiled after the Tiananmen Square protests of 1989. Then, on the Right, well, let’s just dwell on Chile for a moment and leave aside Hitler, Mussolini, and Franco. Chile’s greatest poet was Pablo Neruda who some called the Walt Whitman of Latin America. He was also a fervent communist.

Paraphrasing a physics law, excess generally causes an equal and opposite reaction. The excess in this case was the military takeover of the government.  Military rule drove many Chileans into the arms of the communists culminating in the first democratically elected socialist, Salvador Allende.  Neruda was a close advisor to the new president. But Neruda died 12 days after Allende was overthrown in a military coup, and General Augusto Pinochet took over.  The poet’s work was banned under the Pinochet regime. When Chilean soldiers searched Neruda’s house, he reportedly told them: “There is only one thing here that poses a danger to you: poetry.”  Indeed.  But here’s a Neruda poem that should unite nearly everyone of any political stripe.  Dog Lovers of the World, Unite!

A Dog Has Died

My dog has died.
I buried him in the garden
next to a rusted old machine.

Some day I’ll join him right there,
but now he’s gone with his shaggy coat,
his bad manners and his cold nose,
and I, the materialist, who never believed
in any promised heaven in the sky
for any human being,
I believe in a heaven I’ll never enter.
Yes, I believe in a heaven for all dogdom
where my dog waits for my arrival
waving his fan-like tail in friendship.

Ai, I’ll not speak of sadness here on earth,
of having lost a companion
who was never servile.
His friendship for me, like that of a porcupine
withholding its authority,
was the friendship of a star, aloof,
with no more intimacy than was called for,
with no exaggerations:
he never climbed all over my clothes
filling me full of his hair or his mange,
he never rubbed up against my knee
like other dogs obsessed with sex.

No, my dog used to gaze at me,
paying me the attention I need,
the attention required
to make a vain person like me understand
that, being a dog, he was wasting time,
but, with those eyes so much purer than mine,
he’d keep on gazing at me
with a look that reserved for me alone
all his sweet and shaggy life,
always near me, never troubling me,
and asking nothing.

Ai, how many times have I envied his tail
as we walked together on the shores of the sea
in the lonely winter of Isla Negra
where the wintering birds filled the sky
and my hairy dog was jumping about
full of the voltage of the sea’s movement:
my wandering dog, sniffing away
with his golden tail held high,
face to face with the ocean’s spray.

There are no good-byes for my dog who has died,
and we don’t now and never did lie to each other.

So now he’s gone and I buried him,
and that’s all there is to it.
Translated by Alfred Yankauer