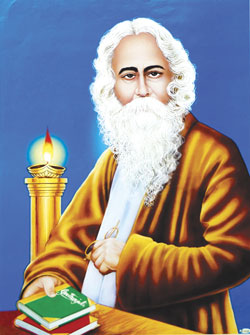 It was my third visit to the State of Bengal and its capital, Calcutta, this time for a brief vacation from my work in Peace Corps/Nepal. Indian friends made clear that Calcutta was India’s culture capital. Literature and poetry, classical music and dance, singing and acting—it’s all in Calcutta. Performances, concerts, readings, and recitals abound both public and private. Innovations and traditional forms coexist beautifully. One name stands out in this artistic galaxy, Rabindranath Tagore, India’s outstanding creative artist. When he became the first non-European to win the Nobel Prize in Literature in 1913, the West took note of this Bengali bard. Bengali bards were not new of course. Even illiterate wandering minstrels were capable of poems like these:

I plunged into the water like a fisherman, hoping to catch the fish of faith.

Devotion which was my fishing net, got torn to pieces.

I only gathered some useless shells---jealousies and blames, churning the mud in vain…

The road to you is blocked by temples and mosques. I hear your call, my Lord,

But I cannot advance---Prophets and teachers bar my way.

Tagore, by contrast, was a sophisticated Brahmin, a novelist, short story writer, satirist, playwright, painter, musician, and lyric poet, India’s greatest poet. And much of his poetry was set to music. Two such poems became the national anthems of India and Bangladesh. Jana, Gana, Mana, the Indian anthem, is a rousing song that brings citizens to their feet, hands on hearts, and tears in eyes. His most famous poetic creation was Gitanjali (Song Offerings), over 100 devotional poems based on ancient Hindu texts. Love is often the subject using imagery drawn from Nature. Imagine him in his Christ-like robes, long flowing beard, gentle gaze and this poem on his lips.

The butterflies spread their sails on the sea of light. Lilies and jasmines surge up on the crest of the   waves of light.

The light is shattered into gold on every cloud, my darling, and it scatters gems in profusion.

Mirth spreads from leaf to leaf, my darling, and gladness without measure. The heaven’s river has drowned its banks and the flood of joy is abroad.

Where the mind is without fear and the head is held high;

Where knowledge is free;

Where the world has not been broken up into fragments by narrow domestic walls;

Where words come out from the depth of truth;

Where tireless striving stretches its arms towards perfection;

Where the clear stream of reason has not lost its way into the dreary desert sand of dead habit;

Into that heaven of freedom, my Father, let my country awake.

Who are you, reader, reading my poems an hundred years hence?
I cannot send you one single flower from this wealth of the spring, one single streak of gold from yonder clouds.
Open your doors and look abroad.
From your blossoming garden gather fragrant memories of the vanished flowers of an hundred years before.
In the joy of your heart may you feel the living joy that sang one spring morning, sending its glad voice across an hundred years.