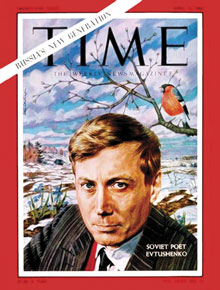 My monthly column explores the life, time and inspiration of great poets. While the collected works of this month’s poet may not yet qualify him for greatness, what he actually did qualifies him for courage. Some of you may remember his name. Yevtushenko. He made quite a splash back in the ‘sixties when the de-Stalinization program got under way in the Soviet Union. Khrushchev’s thundering denunciation of Stalin, his policies, and his methods before the 20th Congress of the Communist Party set the stage for a rueful look back over the last 30 years of Stalinist rule. Yevtushenko would write poems like this:

And when the climate alters/What if we then discover

Branches incapable of shapely growth,/Since we have got used to deformity?

But he had to be careful. The Old Guard was still powerful and censors lurked. Greater artistic freedom was perilous because no one quite knew the boundaries anymore. Yevtushenko tested the boundaries and barely stayed on the left side of the line. But when he published A Precocious Autobiography in England in 1963, he was recalled and his privileges were withdrawn. And the authorities were none too happy when they saw a photo of Yevtushenko bantering with President Richard Nixon during the poet’s USA tour, a tour that included fawning fans who swooned over his good looks and on-stage personality as orator and showman. No, this was un-Soviet, even deviant behavior.

“My poetry, like Cinderella…washes the soiled linen of this age,” he would declaim. He wrestled with the dead hand of the past:

Someone is still living as of old,/attempting to knife whatever’s new.

Someone still glares in the Stalin manner,/ looking at young men askance.

Someone still untamed and restless/fiercely grips the hour hand

and, in striving to drag it down,/hangs on to history’s clock.

Dead hand of the past, your grip on us is still quite strong.

Dead hand of the past,/you’re a dead hand to the last.

Probably his most famous poem is “Babi Yar,” a reference to a ravine in the city of Kiev where the single largest massacre of Jews (over 33,500 in two days) took place toward the beginning of World War II. His poem broke the long official silence about the connection between Babi Yar and the Nazi Holocaust and implicitly criticized the Government for not memorializing the mainly Jewish victims. The regime maintained that only Soviet citizens were massacred with no mention of Jews. Yevtushenko confronted anti-Semitism.

And I myself am one massive, soundless scream/above the thousand, thousand buried here.

The ‘Internationale’, let it thunder when the last anti-Semite on earth is buried forever.

Yevtushenko was also a romantic poet, romantic in his own way:

Let lips remember other lips./Their ice and fire. Their gloom and glow.

The whole world in them./A world all redolent of oranges and snow…

My beloved will arrive at last, and fold me in her arms.

She will notice the least change in me, and understand all my apprehensions.

Out of the black rain, the infernal gloom, having forgotten to shut the taxi door,

She’ll dash up the rickety steps, all flushed with joy and longing.

Drenched, she’ll burst in without knocking, and clasp my head in her hands;