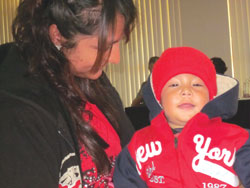 Another cherubic face whose parents brought him to Programa pro Niños Incapacitados del Lago is Santiago Cervantes Tinoco. Santiago is just two years old and lives in the Cedros area of Ixtlahuacan with his parents and two siblings. His Mom, Ana, is a housewife and his father, Armando, works in construction.

Santiago was born with—get ready for this long name---Opsoclononus Myoclonus Syndrome, luckily shortened to “OMS.” OMS is an extremely rare neurological disease which appears to be the breakdown of an autoimmune process involving the nervous system. OMS usually appears between the ages of 12 to 36 months, with the child having had normal development until that time.

There are two known causes of OMS: a neuroblastoma, which is a cancer of the sympathetic nervous system in infants and children, and a viral infection. In Santiago’s case the doctors believe the cause of his OMS is the latter.

Symptoms are involuntary, unpredictable fast eye movements; brief involuntary twitching of a muscle or group of muscles; dysphasia, a language disorder despite evidence of speech ability in the past (this is often part of a larger neurological or psychiatric disorder); lethargy, crossed eyes, sleep disturbances, loss of balance and loss of fine motor skills.

At age two Santiago should be able to stand up and walk a few steps, as well as be able to speak a few words, but he cannot do either. He suffers from convulsions (a side effect of OMS) and has to be on anti-convulsive medications and predisone. His convulsions were bad enough back in October that he had to be hospitalized.

These drugs and others are the only known method of trying to control OMS. It is not an infectious disease or thought to be genetically transmitted. Chemotherapy has shown some benefit in other patients, but little Santiago has not had to undergo this treatment yet.

Since he is fairly new to our Program we are just beginning to monitor his progress every month when his mother brings him to one of our “clinics” for reimbursement of their medical expenses for him. We are hopeful that with good care and some physical and motor skill therapy—as well as the loving care of his mom and dad—Santiago will overcome this very disabling syndrome. At our last regular meeting we were rewarded with this sweet smile, hopefully one of many to come.

To meet another of “our” children and to learn more about what Niños Incapacitados does, please join us the second Thursday of each month for our members’ meeting. Coffee and cookies at 10:00 a.m. at the Hotel Real de Chapala in La Floresta; meeting starts at 10:30.

However, please note: Since the second Thursday of March is also the date of our annual dinner/dance fundraising event—this year “All Aboard the Orient Express”-- our March meeting will be the FIRST Thursday of March, the 7th. Hope to see you there and at the Gala event on March 14th.