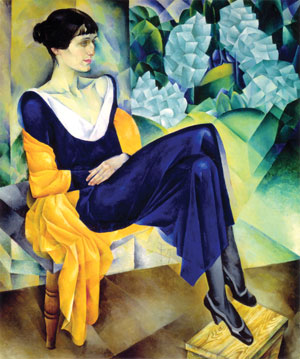 Anna Akhmatova is to Russia what Sor Juana Inés de la Cruz is to Mexico. They are the most gifted women poets of their respective countries. When I look at the calm countenance of Akhmatova (adjacent painting), I’m reminded of the calm, dignified face of the poet nun who graces our 200 peso notes. These are seemingly serene faces. But knowing both their stories, I see more than serenity.  I see stoic faces, suffering faces, enduring faces—visages for the ages.
What these two women were forced to endure would test the equanimity of a yogi. In Sor Juana’s case, the harsh, Inquisition-minded Church of the 17th century that actually removed the writing materials from her convent cell; in Anna’s case the harsh, murderous repression of the Stalinist years. In her words:  “That was a time when only the dead could smile. The stars of death stood over us/And Russia, guiltless, writhed/Under the crunch of bloodstained boots/Under the wheels of Black Marias.” (Trans. by Stanley Kunitz)
Her first husband was executed in 1921 for “counterrevolutionary activity.”  Her son, Lev, was imprisoned for eleven years accused, as was Anna, of bourgeois and, therefore, decadent tendencies.  The strong-armed authorities forbade publication of her poems for decades. She didn’t even dare write them down, so she and her closest friends memorized them.  Under Khrushchev’s de-Stalinization program she was allowed to partially publish once again.  And the result was “Requiem” her most famous poem that recounts the suffering, grief and mourning of the Russian people under Stalin’s tyrannical rule. She had taken on the public role as chronicler of the Terror, the purges and the persecutions.  She became deeply loved by the Russian people. And of her imprisoned son?

Seventeen months I’ve pleaded for you to come home.
Flung myself at the hangman’s feet. My terror, oh my son.
And I can’t understand. Now all’s eternal confusion.
Who’s beast, and who’s man? How long till execution?
(From Requiem. Trans. by A.S. Kline)

Anna Akhmatova was more aristocratic than bourgeois and had become a popular poet and “cultural celebrity” long before the 1917 Revolution.  Her fame stemmed from her femme fatale looks and her fascinating poems that focused on the topic of love in all its wondrous and confusing aspects.
The ice in my breast was unthawing/But my step as before remained light.
On my left hand I found myself drawing/The glove that was meant for my right.
Trans. by Professor Emeritus James E. Falen

Professor Falen’s exquisite translations continue from his new book Intimations.
Come close and sit beside me here/And with a joyful eye take note
Of this blue book of yesteryear---With all the girlish verse I wrote.
Forgive me that I lived in pain/That in the sun my joys were few.
Forgive as well that I in vain/Mistook so many men for you. (1915)
***
How often, after wind and frost/Before the hearth I loved to rest.
But there I failed to guard my heart/And someone stole it from my breast.
It wasn’t hard to guess the thief/I know him by his eyes, you see,
How dreadful, though, that soon enough/He’ll give his booty back to me. (1914)
***
Do not crumple, my dearest, my letter/Don’t weep at an intimate lie,
But deep in your tattered old satchel/Keep my letter uncrumpled and dry. (1912)