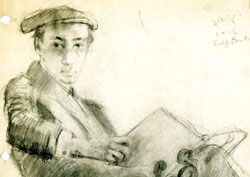 Several months before you died in 1999, I shared with you my great admiration for the poetry of Alexander Sergeevich Pushkin, Russia’s most famous poet. I even read some of his lines while you lay in that nursing home—perhaps a little scared.

When I caress an infant’s face/I tell him in my mind: Farewell!

I yield to you this precious space/My time to fade, and yours to swell.

In turn, you recounted a story about the poet in your life (back in Central High School, Omaha). His name was Gray Burr. A shy, a somewhat effeminate boy, Gray lived in your neighborhood and, to your surprise, wrote poetry. He too must have been surprised, surprised to be befriended by you, Dad, a star athlete, an all-state football player and not particularly shy. You recognized early on his vulnerability and moved to protect him from would-be bullies. And there were plenty of those in the 30s!

I was a young boy when you first told me the story, and you meant it as a teachable moment. The lesson was clear: to the extent you’re able, protect the weak and stand up for the vulnerable among us. Let your life be determined by sympathy of heart and empathetic outreach. It was also a lesson about prejudice, and I thank you for teaching it, Dad.

As you were probably aware, your friend went on to teach English and American literature at Harvard University, Tufts University, and Wheaton College. He served in the U.S. Navy from 1943-1946 in the Pacific Theater. Gray’s poetry books, A Choice of Attitudes (1969) and Shore Leave (2001), received respectful reviews. He also provided numerous poems for The New Yorker, The Partisan Review, Poetry magazine, and he gave many public readings of his work. One reviewer perceived in his poetry “a wry irony as well as melodic affirmation, and a charm of expression that is rare indeed today.” Here’s a Gray Burr poem that proves his point…

With loving memories of you, Dad.

THE SURVIVORS
Out of the murders of winter appear these flowers
Like refugees from camps or barely alive
In the wake of the ice retreat as the beaten powers
Of the season of death depart. These few survive.

Clustered now on the hillside in groups of color,
The tall, the short, the diversified of petal,
They bathe in the sun against a background of duller
Trees and bushes and seem to regain their mettle,

Their flair for hue and blossom and lost perfume.
Here is the rose, for instance, back from the dead,
From lying under the sod in a dungeon gloom,
Emerging in skirts and petticoats of red.

Here is foxglove climbing its limber stalk
As though going hand over hand up a green wall
And the daisies spread in their wind-staggered walk,
A group nodding together in cabal,

White-headed from their memories, and here
Pansies, still keeping their heads down, faces alert.
And the other flowers so perfectly appear
That all seems beauty, loveliness overt.

And only in a butterfly’s trembling wings
As it risks taking nectar from these blooms,
Is there the least suggestion of charnel things,
Of what had happened in those basement rooms.