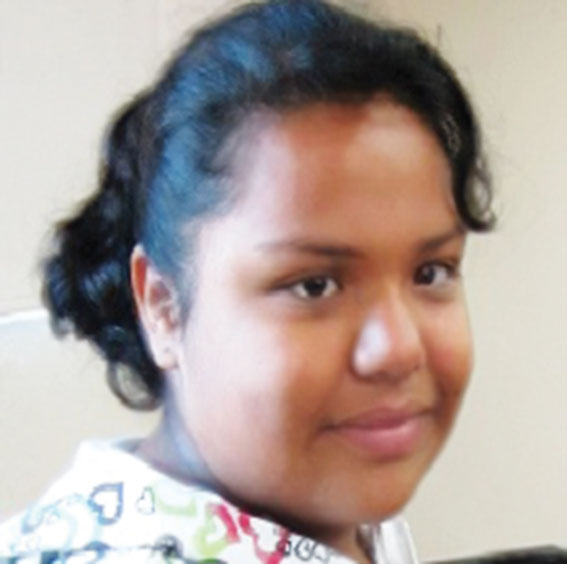 Meet this very sweet 12-year old young lady, María del Carmen Pérez Covarrubias, known as “Carmencita.” She lives in Ajijic with her parents and an older brother. Mom is a part-time housekeeper, and Dad is a gardener. She is in her first year of high school and a good student. In September 2005 Carmencita was playing around the house with her brother, playing at sword fighting actually, when the plastic straw her brother was using went directly into Carmencita’s right eye. The eye became inflamed but it seemed her vision was intact, so the family waited a couple of days to take her for medical attention. By that time she was having trouble seeing out of the right eye, and the ophthalmologist said the retina had detached and would have to be surgically repaired.

This surgery was performed but after a few days Carmencita’s vision had not returned to normal, and a second medical opinion was sought which determined that the surgery had not been successful and that her right eye was not salvageable. A second surgery would be needed to remove the damaged eye and make room for a prosthetic one.

Carmencita wore an eye patch until January of 2006 while the eye healed a bit from the first surgery and also while we at Niños Incapacitados and the family secured funding for what would be a third surgery plus the prosthesis. Fortunately both parents’ employers contributed to this expense, as well as Niños Incapacitados, and the second surgery was scheduled.

For the next few years, until just recently, Carmencita only had to use special eye drops and have regular check-ups with her doctors. She quickly became accustomed to seeing only out of her left eye and the prosthesis functioned normally. She continued in school but only occasional periods of eye irritation (dust, etc.) Fortunately her tear ducts were not damaged and the “new” eye could drain and tear like normal.

This year with her growth spurt as a teenager, the first prosthesis became too small for her eye socket and began to cause more and more irritation and pain. It was time for a replacement, this time big enough for her to “grow into” and that she probably would not have to worry about any other replacements in future. A prosthetic eye has to be precisely measured, fitted a few times to see if all is well, and then the iris has to be hand painted to match the color of the other eye. Niños Incapacitados was fortunate enough to be able to secure a discount from the surgeon due to our status as a charity, but still this new eye cost a whopping 12,000 pesos.

The photo is Carmencita just a couple of weeks ago at our monthly meeting where she was happy for us to try to determine which was the prosthetic eye and which her normal eye. The work is so precise that no one could tell the difference. She and her parents are very pleased with the results, as are we. When we asked Carmencita what she would like to be when she grows up, her answer was “an eye doctor.” Very appropriate, no? If you would like to find out more about Niños Incapacitados and what we do, plus meet one of “our” children, please join us on the second Thursday of each month at 10:00 in one of the meeting rooms at the Hotel Real de Chapala in La Floresta. All are welcome so bring a friend. Coffee at 10:00, meeting promptly at 10:30.