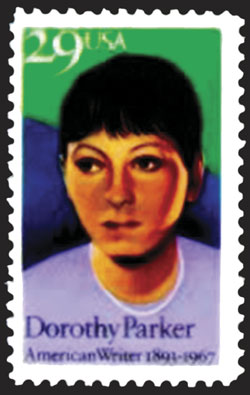 Perhaps America’s most oft recited couplet belongs to Dorothy Parker: “Men seldom make passes/At girls who wear glasses.” This saucy insight undoubtedly led to the development of contact lenses. Ms Parker dashed that off on a cocktail napkin one afternoon at The Algonquin Round Table in downtown Manhattan. There she gathered regularly with other popular authors and literary wits of the day, the likes of Robert Benchley, Alexander Wolcott, James Thurber, and Edna Ferber. She later expanded on the subject of Men in a rather more somber mood:

They hail you as their morning star/Because you are the way you are.

If you return the sentiment, They’ll try to make you different;

And once they have you, safe and sound, They want to change you all around.

Your moods and ways they put a curse on; They’d make of you another person

They cannot let you go your gait; They influence and educate.

They’d alter all that they admired. They make me sick, they make me tired.

Not only tired but privately depressed and drinking injudiciously, she attempted suicide several times in mid-life. But she always pulled back:

Razors pain you; Rivers are damp;

Acids stain you; And drugs cause a cramp.

One of her poems (there were hundreds) is regarded as a profound feminist manifesto even today nearly a century after its publication in The New Yorker.

In youth, it was a way I had to do my best to please,

And change, with every passing lad/To suit his theories.

And if you do not like me so/To hell, my love, with you!

With so much to be cynical about these days, it’s not especially surprising to learn that Dorothy Parker is enjoying a resurgence as the younger generation meets a kindred spirit and hears her poetry and sharp remarks*-- the brittle cynicism of her day. Sophisticated and witty observations like this one bring knowing smiles to young adult faces.

Thought for A Sunshiny Morning:

It costs me never a stab nor squirm/To tread by chance upon a worm.

But her attitude changed with the Great War and Great Depression. Her usual Jazz horn, speakeasy flippancy was replaced by sad and solemn lyrics. She was a better poet than she had been given credit for.

I cannot conjure loveliness, to drown/The bitter woe that racks my cords apart.

The weary pen that sets my sorrow down/Feeds at my heart.

Married thrice, twice to the same man, Ms. Parker dedicated her last poem to her second husband off to the war.

Soldier, in a curious land/All across a swaying sea,

Take her smile and lift her hand---Have no guilt of me.

Soldier, when were soldiers true? If she’s kind and sweet and gay,

Use the wish I send to you—Lie not lone till day!

Only, for the nights that were/Soldier, and the dawns that came,

When in sleep you turn to her/Call her by my name.