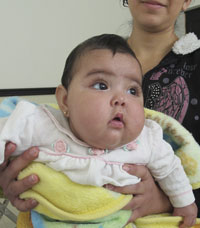 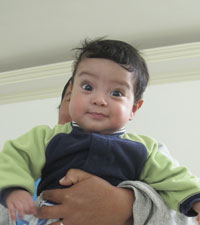 eet our beautiful twins, Maria Estefania and Jose Roberto born to mom Brenda in April 2011. Mom was referred to Programa pro Niños Incapacitados del Lago by the DIF office in Jocotopec in January 2012. She was accepted into our program shortly thereafter.

Infant respiratory distress syndrome affects as many as 43% of premature babies born between 30 and 32 weeks, and almost all babies born before that time. This disease is one of the most common problems of premature babies causing babies to need extra oxygen and help breathing. Full term babies make surfactant, a chemical that helps keep the lungs inflated. Without enough surfactant, premature babies’ lungs don’t inflate well. Preemies may need artificial surfactant or help breathing while their lungs mature. This syndrome is more frequent in infants of diabetic mothers and in the second born of premature twins.

The course of this illness depends on the size and gestational age of the baby, the severity of the disease and the presence of infection.

Doctors suspected Brenda of having had a vaginal infection (sepsis) which was left untreated. This resulted in a cesarean birth at 27 weeks. Mom and the twins were transferred to the Hospital Civil in Guadalajara where the twins remained for three months. Antibiotics were prescribed for Mom and she was released from hospital a few days later. She was given a clean bill of health in a follow up appointment.

There are other complications which can occur in preemies such as Retinopathy of prematurity or ROP also known as “immature eyes.” Blood vessels in the eyes grow abnormally and can result in retinal detachment and blindness. Because ROP is easiest to treat when caught early, the twins were screened while still in the hospital and laser surgery was performed.

Feeding and digestive problems caused by early feeding challenges can cause long-term feeding difficulties including food refusal and slow growth. Severe cases of necrotizing enterocolitis may require bowel surgery which can contribute to difficulty with feeding and digestion. Gastroesophageal reflux disease is another problem that premature babies may have as they grow. Reflux may be mild or severe and will certainly need to be treated.

At this writing, the twins are doing well. Niños Incapacitados has reimbursed the family 5000 pesos for therapies, transportation and hospital consults. Maria Estefania and Jose Roberto are being monitored regularly with hospital check ups monthly and at present are not on any medications. This could have been another sad story, one that we hear all too often; however, in this case there is a happy ending. Brenda and her twins are living with her parents as she was abandoned by the birth father. Brenda’s mom and dad are just as happy with this outcome as she and the twins will be well cared for.