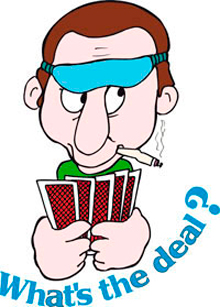 One of the most exciting contracts to bid and make is the Grand Slam. It is a very rare occurrence – the statistically minded have calculated that it only happens in about 0.02% of the hands or roughly 1 in 5,848 deals. But when you are fortunate enough to be dealt the right cards it is important that you and your partner are able to bid them to the optimum contract.

The diagrammed hand, which was played at the Lake Chapala Duplicate Bridge Club in Riberas, offered those playing in the North-South seats an opportunity to achieve this rare result. South began proceedings by opening 1 diamond. Although holding 15 high card points, South felt that the useless doubleton in spades together with the 5-4-2-2 distribution indicated that a suit bid was preferable to opening 1 no trump.

North, holding 19 high card points, was delighted to hear his partner’s bid and he responded 1 spade. In the early days of bridge, most Norths would have responded 2 spades to show a big hand but as the game advanced it was found that this was an unnecessarily space-consuming bid and most players now use jump-shift bids to show weak, not strong, hands.

Now South felt that 1 no trump was an appropriate rebid as the concern about the poor spades had been abated and she had stoppers in all the other suits. This was all that North needed to hear as he launched into the Gerber Convention, the preferred way to check for aces and kings after a no-trump bid. North’s 4 clubs asked South to tell how many aces she held and her 4 spade bid showed 2 aces.

Next North made the bid of 5 clubs which asked South to show how many kings were in her hand (while guaranteeing that the partnership held all the aces). South now bid 5 spades to show 2 kings and North paused for reflection.   North could count 8 tricks off the top in aces and kings. The queen of spades and the queen of clubs assured 2 additional tricks so could the total be increased to 13? North reckoned it could as he had one more important piece of information to go on: South’s original rebid of 1 no trump had, by partnership agreement, shown a holding of 2 or 3 spades. The odds were in favour of the spade suit producing 6 tricks and that would bring the total to the desired 13.

The last piece of the puzzle from North’s point of view was whether to place the contract in 7 spades or 7 no trump. As this was a match point duplicate event, the decision was easy: 7 no trump is worth 10 more points than 7 spades and so that was North’s final bid.

One additional consideration in choosing no trump over spades: the contract could not be scuttled by the partner of the opening leader ruffing the first trick!

I hope the next time you and your favourite partner have the necessary combinations of cards that you will be also able to enjoy the thrill of bidding and making a Grand Slam.