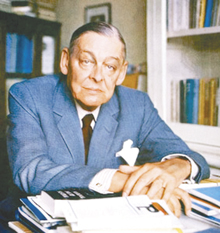 Aside from the “T. S. Mrs. Eliot” taunt of yesteryear, first impressions of Thomas Stearns Elliot are confusing and his odyssey puzzling. On one hand, for example, we know he was the exponent and practitioner of Modernist poetry realized with the 1915 publication of The Love Song of J. Alfred Prufrock. * On the other, he was a deeply conservative man who respected respectability. He declared that he was “…a classicist in literature, a royalist in politics, and an Anglo-Catholic (sic) in religion.”  He solemnly wrote: “Flesh and blood is weak and frail/Susceptible to nervous shock/While the True Church can never fail/For it is based upon a rock.” Born of a family well-connected within the Unitarian establishment of Boston, he nonetheless converted and was baptized into the Church of England in 1927 and later became a British citizen at the age of 40.

Unlike many of us at Lakeside, he was a true expatriate! Perhaps our most erudite poet, Eliot, along with novelist James Joyce, could and did lace their works with obscure allusions in Greek, Latin, French, German, Italian, and Sanskrit “Datta, dayadhvam, damyate” (Give, sympathize and control) for what it’s worth!  Eliot is probably best known for The Waste Land, yet how can we forget the record-breaking musical “CATS” based on his Old Possum’s Book of Practical Cats. (The Old Possum, by the way, is Eliot himself.)

Growltiger was a Bravo Cat, who travelled on a barge:

In fact he was the roughest cat that ever roamed at large.

From Gravesend up to Oxford he pursued his evil aims,

Rejoicing in his title of “The Terror of the Thames”.

So how does a boy born and bred in St. Louis, Missouri wind up in the graveyard of St. Michael’s Church in East Coker, England? The details are too numerous for this piece, but I can sum it up in a word—Harvard. A first-class education (Comparative Literature) and first-class contacts during his postgraduate years abroad at the Sorbonne and Oxford where Eliot put down deep English roots.

While he regarded Four Quartets as his masterpiece and it led to his being awarded the Nobel Prize, literary scholars say that The Waste Land is his most important poem and that poetry has never been the same since. The Romantic movement, with its “mush and self-conceit,” was over. The aftermath of WWI was The Waste Land:

April is the cruelest month, breeding lilacs out of the dead land, mixing memory and desire, stirring

But one critic called it “a true picture of the junkyard of the intellectual mind.” You be the judge:

And so each venture/Is a new beginning, a raid on the inarticulate

In the general mess of imprecision of feeling,

When the evening is spread out against the sky

—I shall wear the bottoms of my trousers rolled.

—I have measured out my life with coffee spoons.

—I should have been a pair of ragged claws

—Scuttling across the floors of silent seas.

We shall not cease from exploration

And the end of all our exploring

Will be to arrive where we started

And know the place for the first time

*Prufrock-Litton Company was a furniture store in St Louis, which only proves that poets take their inspiration from the oddest places.