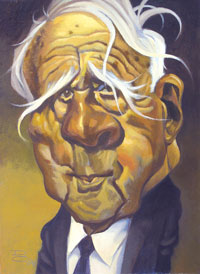 When I consider his homely Yankee farmer persona and recollect his iconic New England themes (After Apple-picking, Mending Wall, The Last Mowing), I have to laugh that Robert Frost was born and mostly bred in San Francisco. But when the family moved to Massachusetts, Frost found himself and found his voice. He discovered a need to become a poet. By the 1920s, he was America’s most celebrated poet and with each new publication, his fame and honors (including four Pulitzer Prizes) increased.

Do you remember that biting cold (one might say frosty) day when Frost assumed the podium at President John F. Kennedy’s swearing-in, January 20, 1961? In the day’s harsh sunlight, his eighty-six year-old eyes had difficulty reading the poem he had written for the august occasion. He decided instead to recite from memory the one we actually heard. And it’s just as well because the poem he originally composed for the event wasn’t nearly as meaningful and patriotic as

The land was ours before we were the land’s. She was our land more than

a hundred years before we were her people. She was ours in Massachusetts,

in Virginia. But we were England’s, still colonials, possessing what we still were unpossessed by; possessed by what we now no more possessed. Something we were withholding made us weak. Until we found out that it was ourselves

we were withholding from our land of living, and forthwith found salvation in surrender. Such as we were we gave ourselves outright (The deed of gift was many deeds of war). To the land vaguely realizing westward, but still unstoried, artless, unenhanced, such as she was,

such as she would become.

Well, let’s just sit back, relax, and enjoy some vintage Frost. His first published poem My Butterfly included these lines:

Thou didst not know, who tottered, wandering on high,

That fate had made thee for the pleasure of the wind,

With those great careless wings,

Nor yet did I.

I’m going out to fetch the little calf

That’s standing by the mother. It’s so young

It totters when she licks it with her tongue.

I shan’t be gone long. You come too.

Everyone knows these lines:

My little horse must think it queer

To stop without a farmhouse near.

The woods are lovely, dark and deep.

But I have promises to keep,

And miles to go before I sleep,

And miles to go before I sleep.

A farmer finishes an axe-handle, and Frost says:

But now he brushed the shavings from his knee

And stood the axe there on its horse’s hoof,

Erect, but not without its waves, as when

The snake stood up for evil in the Garden.

Something there is that doesn’t love a wall.

The old dog barks backward without getting up.

I can remember when he was a pup.

The Span of Life

I shall be telling this with a sigh

Two roads diverged in a wood, and I---

I took the one less traveled by,

And that has made all the difference.

Some say the world will end in fire. Some say ice.

From what I’ve tasted of desire, I hold with those who favor fire.

But if it had to perish twice, I think I know enough of hate

To say that for destruction ice is also great and would suffice.