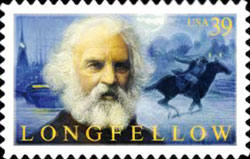 For those sensitive Readers who yearn for a friendly verse, of poetic rhyme, of piquant turn of phrase, of unmuddled message and salubrious rhythm—a cousin to the Rhythm that pervades our cosmos and even our lives on planet Earth. For those befuddled Readers who squirm when reading a modern poet, a modern like, say, Federico Garcia Lorca, (1898-1936) Spain’s poet rage of a generation.

With a spoon he scooped out the eyes of crocodiles

And spanked the monkeys on their bottoms. With a spoon.

Forgot the moss of the villages.

For those bewildered Readers, I have just the anodyne poet. His works are all but lost to modern memories except yours and mine. Let us praise once more then, before he fades into star dust, Henry Wadsworth Longfellow. What a life, what a man!

A son of Massachusetts, but a graduate of Bowdoin College in Maine, he went on to become a popular professor at Harvard and an Honorary Doctorate of Laws. He was clearly the most popular poet of his time and was hailed around the world as America’s first great poet. With such poems as The Midnight Ride of Paul Revere, The Song of Hiawatha, Evangeline, The Wreck of the Hesperus, he engaged the imagination of a generation both before and after the Civil War. Column space permits just a few stanzas. Forget for a moment the jangle, din and shrieks of discordant modern life.

From the brow of Hiawatha
Gone was every trace of sorrow,
As the fog from off the water,
As the mist from off the meadow.
With a smile of joy and triumph,
With a look of exultation,
As of one who in a vision
Sees what is to be, but is not,
Stood and waited Hiawatha.

You know the rest. In the books you have read,
How the British Regulars fired and fled,--
How the farmers gave them ball for ball,
From behind each fence and farm-yard wall,
Chasing the red-coats down the lane,
Then crossing the fields to emerge again
Under the trees at the turn of the road,
And only pausing to fire and load.

It was the schooner Hesperus that sailed the wintry sea;
And the skipper had taken his little daughter to bear him company.

He wrapped her warm in his seaman’s coat against the stinging blast;
He cut a rope from a broken spar and bound her to the mast.

At daybreak, on the bleak sea-beach, a fisherman stood aghast,
To see the form of a maiden fair lashed close to a drifting mast.

When’s the last time you read the words “wealthy poet.” Almost seems like a contradiction in terms. Yet at his height, Long fellow could fetch $3,000 per poem! And at his death, he had over $350,000 in the bank, a tidy sum in those days following the Civil War.

Then from each black accursed mouth
The cannon thundered in the South,
And with the sound the carols drowned
Of peace on earth, good-will to men!

Then pealed the bells more loud and deep:
“God is not dead; nor doth he sleep!
The Wrong shall fail, the Right prevail,
With peace on earth, good-will to men!”