The Father of Mexico 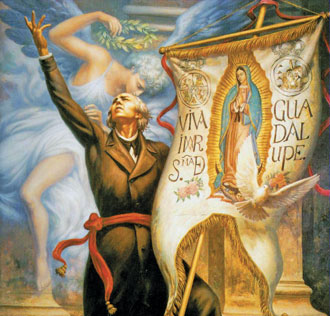 The Roman Catholic priest Miguel Hidalgo y Costilla began the Mexican Revolution for independence from Spain by ringing his parish church bells at 2:30 AM on September 16th to call his parishioners, not to Mass, but to revolt against tyranny and bad government. Although his exact words were not recorded it is believed Hidalgo shouted some of the following; “My children . . . will you free yourselves? Will you recover the lands stolen three hundred years ago . . .? We must act at once . . . Will you defend your religion? . . . Long live Our Lady of Guadalupe! Death to bad government!” And with these words began an eleven-year bloody struggle for independence from Spain. Each September 15th at 11:00 PM the president of Mexico and every local mayor shouts “Viva Mexico!” three times to the assembled citizens, who repeat the greeting. The Mexican national anthem is usually sung after this and colorful fireworks fill the dark skies before a night of music and festivities.

The revolt against Spanish rule was originally planned to begin in December, after the harvest season. However, word of the possible revolution against the Spanish was leaked and Hidalgo, a man of quick action, called his parishioners to announce that it was time the revolt against Spanish dominance begin. The Hidalgo family was typical of many Creole Mexican families whose fortunes were wiped out when, in 1805, the Spanish King Carlos decreed that all loans granted by the church in Mexico be repaid within a year. The Hidalgos, like so many other families, had borrowed from the church in order to increase their land holdings, which represented their wealth and provided income. However, to pay these loans in a year was impossible and unrealistic for almost everyone.

Hidalgo’s mother died when he was nine, and he and a younger brother were sent away to school. His schoolmates called him “El Zorro,” or “The Fox” because he was clever. In 1778, at the age of 25, Hidalgo was ordained a Catholic priest. Because of his intelligence he immediately began teaching Latin grammar and theology at the Colegio de San Nicholas in Morelia, one of the most important educational centers in the Viceroyalty. At the age of 39 he became dean of the school. However, he lost this position when some university funds were missing. He was not an ordinary priest and was twice investigated by the Inquisition.

In 1803, when Hidalgo was 53, he was assigned to the post of Parish Priest in Dolores, near today’s San Miguel de Allende. He arrived with his younger brother, two half-sisters, his mistress Maria and two of his nine known children by four different women. He might have been a priest who had taken a vow of celibacy, but he always chafed against rules, regulations, and some laws. Throughout his 28 years of teaching and preaching, Hidalgo taught his parishioners not only their religion, but how to be self-sufficient by using nature and people’s God-given talents. Against the laws of Spain, Hidalgo explained agronomy to his congregation. He taught them to plant and care for olives and grapes, to help the people make olive oil and wine, both prohibited by Spain who, for economic reasons, wanted to keep New Spain, or Mexico, dependent on the mother country and because economically Spain did not want ships sailing to the colonies without cargo. This policy, along with denying political powers to Spanish subjects born outside of Spain, created deep feelings of resentment and perpetuated a caste system. People of Spanish blood born outside Spain were known as Creoles, and although they owned vast properties, wielded economic power, were religious and local leaders, they were totally subject to the economic and political rules of Spain, only a step above the indigenous peoples.

After nearly three hundred years of discrimination the people of Mexico, both Creoles and natives, were understandably frustrated and angry with the Spanish crown. Hidalgo was a Creole of Spanish blood, but because he and his siblings were born in Mexico their careers were limited and like all Creoles their voices were ignored. The Creoles were like prickly cactus growing in the desert with their limbs uplifted and pleading to be heard. No revolution occurs without an eloquent leader who emerges at the correct time to assemble and inspire followers. Although the Mexican Revolution for Independence began in a small pueblo, it soon exploded into a force estimated at over 80,000 followers armed mostly with machetes, sticks, and stones. As a volunteer army of mostly campesinos (country people) grew, so did the movement, and Hidalgo’s inability to govern his followers nearly undid the revolution. When he and his followers entered nearby Guanajuato, the local Spaniards and Creoles sheltered themselves in the fortress like granary. Unfortunately, the fortress was breached and the 600 men, women, and children inside were slaughtered and the treasury looted. This act cost Hidalgo and his movement the support of many Creole families and turned him into a wanted man with a price on his head.

Hidalgo intended to lead his peasant army into Mexico City. However, because it was well protected he came to Tlaquepaque where on November 26, 1810, the former priest proclaimed himself a supplicant general. At the nearby Guadalajara cathedral, he was received by the bishop, clergy, and reluctant city dignitaries who, with forced smiles and sprinkled holy water, blessed his cause. Hidalgo remained in Guadalajara until January 1811 and while he was here, in the Palacio del Gobierno, he signed his most famous proclamation that abolished slavery in all of Mexico. In the plaza behind the cathedral there is a statue of Hidalgo breaking the chains of slavery that had bound millions to a lifetime of servitude. Lincoln would not free American slaves for another 52 years.

While in Guadalajara, Hidalgo also founded El Despertador, a newspaper that, although it only published seven issues of 500 copies each, spread the word of the revolution and caused intelligent people to talk about the endemic problems of being ruled by an unjust group of “foreigners.” The newspaper, which came out each Thursday, was recirculated throughout all of Mexico and its ideas permeated all social strata. It had a stronger voice than any from a pulpit or university.

On January 25, 1811, Hidalgo was betrayed, and he and his volunteer army were defeated by the Royalists at the Calderon Bridge, 37 miles outside of Guadalajara. Hidalgo was captured, and on July 27,1811, he was defrocked, excommunicated, and found guilty of treason. Before his execution he thanked his jailers. His decapitated head was displayed at the Guanajuato granary that his followers had taken ten months earlier. Even today many people continue to believe that a body without a head can never enter heaven. Hidalgo’s remains are interred at the base of the famous gold “Angel of Independence,” in Mexico City.

Hidalgo may have entered and left Guadalajara with the hope that Mexico would soon be free of Spanish rule, but his death did not squelch the desire for self-government that his peasant movement started. The struggle for Mexican Independence lasted eleven years. Today, although his actual rallying words may be forgotten, his voice is heard as the Mexican people gather in their plazas to hear their president or local leader shout, “Viva Mexico!”