THE FUN SIDE OF THE WALL: Baby Boomer Retirement in Mexico

A book review by Blue 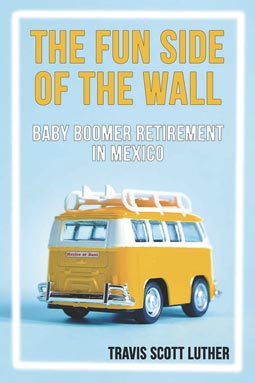 A search on Amazon reveals 111 books for “Retire in Mexico.” One of the most recent books, published in December 2019, takes a unique approach to the subject. Rather than a how-to book on retiring in Mexico, author Travis Luther delves deeply into the sociological and psychological reasons hundreds of thousands of U.S. Boomers are choosing the expat life in Mexico.

“Why would U.S. citizens want to leave America?” was too broad for his Master’s thesis, so he focused on Mexico and took an intimate look at the lives of Baby Boomers already living there, discovering their motivations for moving there as well as why they stay.

In addition to U.S. census information and other current studies, he has conducted over 500 interviews and surveys with what he calls “Mexican Boomers.” The surveys were divided into four distinct sections, with questions related to:

A significant part of the book discusses why retirees in the United States are leaving in greater numbers than ever before. It could be a dry read, but it is not, because of his personable writing style and openness about his own inaccurate preconceptions and his surprise at the findings.

From his surveys, Travis included several graphs showing the differences between U.S. Boomers and Mexican Boomers regarding age, race, marital status, finances, and party affiliation. Here’s an example of one of the many charts included in the first half of the book: 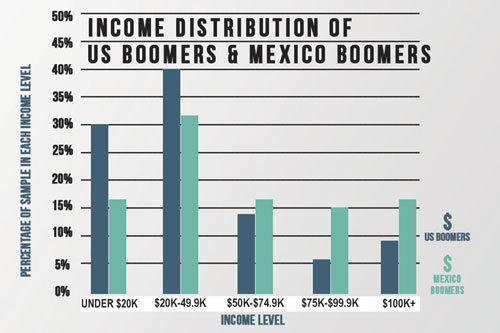 Based on his demographic survey data, a typical Mexico Boomer would be: A married, 59-year-old, college-educated Caucasian with a higher-than-average income, who votes Democrat, is a liberal, well-traveled, adventurous, and has lived in Mexico for an average of five years. He also was surprised to discover that there are about 50% more single women than men.

Although many Boomers admitted their original motivation in moving to Mexico was to improve their lifestyle while saving money in their retirement years, 90 percent of those interviewed said they would not return to the U.S. even if they were given $1 million USD.

The Boomers in the U.S. feel discriminated against. They don’t see people who look like they do in the media; they have difficulty finding jobs after age 55; they feel they are not treated with respect and concern in many senior facilities.

In terms of community, Travis says, “More and more research shows that depression and personal dissatisfaction could be alleviated through cognitive exercise and good community, including meaningful opportunities for volunteerism and civic engagement. People who study senior cohousing identify mental exercise, civic engagement, group decision-making, and meaningful opportunities to participate within the community as important dimensions for community satisfaction. The White House Conference on Aging even ranked good community over affordability in its list of priorities related to retirement policy planning.”

His research shows that Mexico Boomers retire an average of five years earlier than U.S. Boomers.

Throughout the book, Travis inserts personal stories from Mexico Boomers who live in various expat communities and, in an interesting comparison, he shows how retirement has evolved from the Stone Age to current times.

Travis is targeting his book to Mexican Boomers who are interested in some of the ideological aspects of retirement abroad as well as Boomers considering retirement in Mexico. For that reason, he includes cursory information on these topics:

Finally, in the appendix, he briefly discusses seven of the most popular Mexico expat communities:

The Fun Side of the Wall—definitely tongue in cheek—was a great read for me. Although many Lakesiders will be familiar with much of the material about Mexican Boomers, I found the wealth of information about the sociological and psychological aspects concerning Boomer expats fascinating. It’s not a how-to book; it’s a why-to book, and one you’ll want to encourage your friends and family north of the border to read.

(Travis is 42 and lives in Colorado with his wife and two sons. He hopes to move to Mexico in eight years. He is a best-selling writer and award-winning entrepreneur. He is a former Adjunct Professor of Entrepreneurship at MSU Denver where he also earned his Master’s degree in Sociology.)