—The Surprising Environmental Record of our 37th President 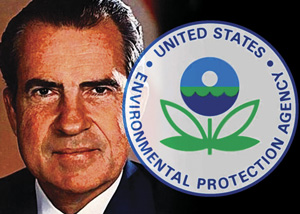 He seems to glower at us from old newsreels and the pages of history texts. Unlike such other national leaders as Franklin Roosevelt and Ronald Reagan, he seems not to have inspired affection even among his most fervid supporters. It has been said that all is fair in love and war and politics. Well, not necessarily. Early in his political career, Richard Nixon was never loath to climb over the bodies of his opponents, even to the extent of blackening their reputations. He may have been the most complex individual to ever occupy the office of President of the United States. It is doubtful that any of us truly understood him; perhaps it is doubtful that he understood himself.

As Vice President, he was the quintessential cold warrior, promoting the Domino Theory, the view that somehow the failure to replace departing French troops in Vietnam with US forces following the 1954 debacle at Dienbienpu would result in waves of Communist demons next menacing the coast of California. At times, he appeared to take advantage of the demagogic ravings of the later discredited Senator Joseph McCarthy who would have had us believe that a Communist lurked beneath every one’s bed and behind every well manicured suburban rose bush.

In order to win the Presidency in 1968, Nixon adopted the so-called southern strategy advanced by columnist Kevin Phillips, shamelessly seeking the support of unrepentant southern racists, even embracing the outrageously hypocritical Senator Strom Thrumond of South Carolina. “Clear it with Strom” became the catchphrase before any policy decision was agreed upon.

So much for the dark side of Richard Nixon. There was another side, one for which he has been given little credit. It has been observed that Jimmy Carter and Bill Clinton were the two most conservative Democratic presidents of the twentieth century and that Richard Nixon was the most liberal Republican president. When the entire record is examined, he comes across as an old fashioned New Dealer, a nuts and bolts manager determined to solve the problems that were tearing US society to shreds at the time.

Convinced by economist Milton Friedman that the draft was not good for the US economy, he ended it, replacing it with an all volunteer military. Aware that the seemingly endless war in Southeast Asia was dividing the country as it had not been divided since the Civil War, he entered office planning to end the conflict within a year. Tragically, it was to take another six or seven years before he was able to extract the country from perhaps its most divisive overseas conflict. And yet, under the leadership of Gerald Ford, his successor, we were, for all intents and purposes, out of it.

Hoping to solve the problem of poverty and at the same time eliminate a vast and ponderous bureaucracy, he devised a negative income tax plan, one that would outrage contemporary conservatives, more interested in ideology than problem solving. His plan was complex but never saw the light of day, shot down by southern racist Democrats in a Senate subcommittee.

While he has been credited with many accomplishments, such as opening the door to relations with Mainland China, which up until then we basically tried to pretend did not even exist, perhaps it is in the area of environmental protection that Mr. Nixon accomplished the most, and for which he has yet to receive long overdue credit.

Sensing that US voters were growing ever more concerned about the environment, Nixon worked with Congress to establish the Council on Water Quality and the Environmental Protection Agency in 1970. He signed the Endangered Species Act into law in 1972, as well as the clean Water Act. In 1972, it was Nixon who banned the use of poisons to reduce the population of predators like wolves and coyotes on federal lands. In 1972, he initiated the ban on the domestic use of DDT, although it is still in use in some other nations. He even signed a migratory bird treaty with the USSR. Under his administration, more lands were devoted to national parks, wildlife refuges and wilderness areas, in sharp contrast to our current presidential administration that seeks to shrink national parks and monuments, open forests and prairies to strip mining and fracking, and degrade and defile the landscape in every way imaginable, all the while encouraging the shooting, trapping or poisoning of any creature that doesn’t look like a cow, a sheep or a pig.

Nothing in Mr. Nixon’s past suggests a love of nature or a sensitivity with regard to wildlife or habitat, although he seemed to love the ocean and the seacoast, whether at his homes on the California coast or in Florida’s Biscayne Bay. Perhaps he simply recognized the direction that society was headed in and proceeded to lead them there. It is doubtful that such cynicism is justified. He tried to be, above all else, a problem solver.

In the end, rendered nearly ineffective by his role in covering up the Watergate scandal, he chose political self immolation rather than put the nation through more of the impeachment process.

I never voted for Mr. Nixon. In 1968, I spent my Saturday mornings standing in supermarket parking lots handing out Eugene McCarthy for President brochures, as quixotic an endeavor as I have ever engaged in, given that my hometown of Ashland, Ohio was rock-ribbed Republican to the core. I repeated my folly in 1972, going door to door and serving on a phone bank for George McGovern. At the height of the Watergate scandal, I circulated a petition urging Nixon’s impeachment.

No one will ever know who the man was who lived behind that mask of Cold War rhetoric, who catered to society’s most base instincts with phrases like “Will it play in Peoria” and referring to his political base as the silent majority, perhaps unaware that the term originated in The Iliad and referred to the dead. Still, credit where credit is due. He was one of our more innovative and successful environmental presidents.