The Healing Power Of  Wilderness 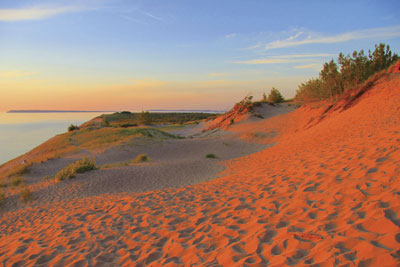 Once upon a time, according to the Ojibwe and others who dwelled along the shores of the northern Great Lakes, a fierce forest fire reeked and smoked across the region we now know as Wisconsin. A mother bear, fearing for the safety of her twin cubs, ushered them into the waters of Lake Michigan to begin the 65-mile swim across to safety on the opposite shore. Before they could reach land, the cubs surrendered to exhaustion and sank to the sandy bottom. The mother bear, unaware of their plight, scaled a hill from which she could watch for her two children. After a time, the mother bear became the Great Sleeping Bear Dune, and offshore two islands, North Manitou and South Manitou, mark the resting places of the bear cubs. Today, the dune and the two islands are part of the Great Sleeping Bear National Lakeshore, administered by the National Park Service.

Some years ago, along with two friends, I toted my 65-pound backpack six miles across North Manitou Island, a wilderness area completely without conveniences. It had been a particularly challenging spring and summer, and I hungered for spiritual healing. David Brower once said that without wilderness the world is a cage. I had been caged for too long, not a physical cage but one composed of the expectations and presumptions of others as well as my own all-too-often misdirected idealism. My return to the wilderness was to crack the door open to subsequent adventures in the mountain West, the north woods of Minnesota, the misty Blue Ridge, and other Edens.

Wilderness backpacking has never failed to provide a powerful balm for a wounded soul. Lugging a ponderous pack containing all that is necessary for the sustenance of life over a rough trail causes one to live in the moment. Having cast off ahead of time the superfluous, the unnecessary, the burdensome, and reduced one’s possessions to absolute necessities, the backpacker finds himself yearning only for the campsite at the end of the long day’s trek. Backpacking removes a person from his comfort zone and is a liberating experience, given that one’s comfort zone is all too often one’s dead zone.

To enter wilderness is to open oneself to the miraculous, and the miraculous will heal the wounded spirit. The first miracle I was to encounter that summer on North Manitou Island was the singing sands. Rubbing your palm over the surface of the sand on a Manitou beach produces a humming sound that is easily heard. It cannot be just any sand. It has to be the singing sands of Manitou. If you were to gaze at the magical sands of Manitou through the lens of a microscope, you would find that they are more rounded in shape than regular sand, lacking sharp, jagged edges. Rubbing one’s hand over the surface causes the sand to shift in planes and vibrate loud enough to be heard. Miracle solved. A reasonable scientific explanation. And yet, a miracle nevertheless.

Perhaps even more spectacular was the evening when I first experienced the fabled green flash in the sunset. At the very moment when the sun began to sink beneath the watery rim of the world, a brilliant green flash illuminated the edge of creation. The flash lasted for less than a second but left me speechless. It is said among the islands of the Caribbean that once you have seen the green flash, good fortune will follow you all the days of your life.

As with the singing sands, there is a scientific explanation for the green flash. The atmosphere acts as a huge prism, and I was sitting on that wilderness beach inside that prism. At sunset, the rays of light emanating from the sun hits the atmosphere at an oblique angle and are bent downward. As the sun dips below the horizon, its disc of light is broken down into a series of different colored layers. Dust and water particles and pollutants hinder the light waves streaming toward us, and they go bouncing off. The smaller the wavelength of light. The smaller the particles able to disperse it. So the next available color after the blaze of the sun is green. On that evening, the air itself acted like a giant magnifying glass and gave onlookers the gift of the green flash. And yet no scientific explanation can erase the sense of the miraculous.

Submerging oneself in the wilderness opens one’s senses to the beauty and the majesty that always surrounds us. Sleeping out beneath the star-spangled heavens with only the earth for one’s bed, far removed from the curse of manmade light pollution, fosters a sense of awe and oneness unlike any other experience. I wandered down to the wave-tossed beach alone one night and stood in silent wonder as the planet Jupiter cast rays of light across the watery wastes, competing with the moon and the stars.

We went to sleep with the sunset and arose at sunrise. When a fierce equinoctial storm came thundering across the waters, we sought shelter, finding joy in the music of the hail stones thumping against our tent flaps.

The miraculous is wherever you find it, when you meet a lumbering, pulchritudinous bear on a mountain trail, when you thrill to the howls of a pack of wolves, the drumming of a pileated woodpecker, the songs emanating from a pond teeming with spring peepers, even the rumblings of a summer thunderstorm. I returned from my sojourn with my soul refreshed, prepared to confront new challenges and vowing to seek refuge in wilderness whenever it called to me.