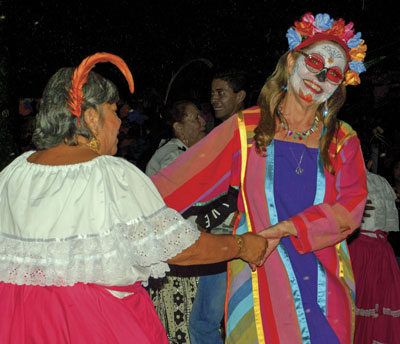 Just one more “hurrah” before..., I thought; before what, I didn’t know, only that something would shift to make this little hurrah not possible for my next Halloween birthday. I didn’t know it would be a pandemic, but COVID-19 makes the memory of last year’s celebration all the more precious.

My plan was inspired by a colorful caftan I’d found in a Riberas thrift store. I discovered later it was a vintage collectible dress by Josefa, said to be the Mother of Mexican Fashion Design. I decided to do something for charity with it, but wanted some photos of myself in it before I let it go.

My simple birthday wish was to have my face painted in Day of The Dead makeup, have lunch in Ajijic, then wander aimlessly with my husband getting photos along the way. I had no idea that the heart and soul of the Mexican people would infuse my day with such revelry and joy.

The salon where I had my Catrina makeup done was already in a festive mood: everyone in Halloween costumes, a table laden with refreshments, wine at 10 am (not for me, gracias!). The costumed staff surprised me with birthday roses and a chorus of “Feliz Cumpleaños!” My special day was off to a magical start.

We headed to a lunch spot two blocks away, but were stopped three times on the way by folks who wanted a photo of “Catrina” in my colorful caftan, face paint, and floral crown.

After we ordered our meal, I headed to the baño. As I passed the open-air kitchen, several Mexican workers paused to smile and give me a thumbs-up. The señora who owned the place asked for a photo. I obliged, then told her about Josefa Ibarra, and that besides celebrating my Halloween birthday, I was honoring her memory by wearing her creation. She seemed to delight in my attempt to capture the spirit of their Dia de Los Muertos festivities.

Mexicans, both locals and tourists, had the same reaction everywhere we went. Driving through the streets, a family sitting on their doorstep greeted me with smiles and waves. I posed for my husband with Scott, a fluffy white dog who was fond of wearing sunglasses. A small crowd gathered, asking if they could get photos, too. Scott and I modeled for the cellphone paparazzi like movie stars.

When we passed a construction site, a worker asked why I was already in a Day of the Dead costume, a day early. I explained that Halloween was mi cumpleaños. He and his crew ran away, out of sight, as I yelled, “It’s okay! I’m a White Witch! Bruja Blanca! Bruja Buena!” I thought they were scared off, but instead they poured out of the building to line up on the street with me to wish me feliz and take selfies.

Everywhere we went, my Catrina was welcomed with joyful appreciation, including the elder señora dancing in the plaza, who grabbed me from my chair to join her for a few vigorous turns on the dance floor. I was exhausted by then, but when a Mexican abuela insists that you dance with her, you don’t explain that you have paralyzing arthritis; you find a way and just pay the price later and are grateful for every ache, knowing it was earned in a state of playful bliss.

These were just a few of many such moments. My simple birthday wish turned into a day full of happy, heartfelt moments, made all the more enchanted by the grace and generosity of our Mexican hosts. Thanks for the memories! ¡Gracias por los recuerdos!