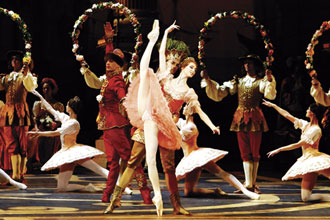 It is nearly 12:30 midnight and we have not long ago got back from the Bolshoi New Theatre. Our hotel is close enough to the centre of Moscow so we walked home rather than take the Metro, incidentally, the deepest underground I have ever experienced.  The New Theatre is smaller than the main Bolshoi Theatre with its 6 tiers, but it is still a very sizable opera house with three tiers and reminds me of my all-time favorite opera house in Venice, La Fenice where I  performed so many years ago with London Festival Ballet, with its delicate green, pink and gold interior. This one is green, a lovely olive green, with green plush armchair seats, very comfortable, exquisite green and gold curtain and with much less gold leaf than the main stage. The enormous chandelier is beautiful crystal, and the domed ceiling has frescoes of Bakst’s costumes from the Diaghilev period. Some of the audience was very dressed up, but others, as we were, were dressed very casually.

Many people in Russia, in Moscow particularly, have pots of money, with black smart cars and chauffeurs. I have never seen so many hugely tall women before, long-legged and lanky, with silky hair down to their waists, beautifully dressed with tons of make-up. Do I ever feel like a hick! I normally wear no make-up anymore, but in the last few days I’ve started putting on a bit of eye-liner and mascara just to feel more dolled up.

They opened with Russian Seasons, a new work by Alexei Ratmansky, a modern ballet, bare stage, simple costumes, each of the six couples in a different color and performed to a modern score (the composer was in the audience). I have to confess I struggled to stay awake. It was beautifully danced, but I didn’t like the music, found the movements repetitious, and the same old modern ballet with quirky things thrown in that I find tedious. It didn’t help to have some beery smelling men behind us yelling BRAVO! to burst our eardrums every time a dancer did a trick, just part of a professional’s technical skill, but that they thought was incredible.

The second ballet was Balanchine’s Apollon Musagette with music by Stravinsky, which I had seen years ago danced by the Canadian National Ballet. I was surprised to find that I still liked it and was reminded that Balanchine was a truly inspired choreographer who broke new ground, taking ballet perhaps for the first time into its now current modern form and he always had something to say, be it an abstract or a story ballet.

The closing piece was The Classical Symphony, a delightful piece for seven couples by Uria Posokova to Prokofiev’s upbeat music of the same name, some of the melodies in it reminiscent of Romeo and Juliet and Cinderella. The women wore the cutest golden tutus, like miniature hoops, and the men were all in black. I liked this piece best of all, but once again had to contend with the beer bellies yelling Bravo if some fouette pirouettes were done or a series of barrel turns! I have become an old crab! I’m pleased to say that I think our major Toronto-based company, the National Ballet of Canada, does not compare too badly at all with what we saw tonight.

We won’t be going to St. Petersburg. We started this trip in the Crimea at Evpatoria on the Black Sea for twelve nights, and are spending 12 nights in Moscow and then leave for London this coming Sunday; then on to Mexico for the winter. It’s turned very cold here in Moscow, about 3 degrees in the day with icy winds and below zero at night. The puddles have turned to ice. I’m so glad I brought a few warm things and best of all, my hat with rabbit’s fur lining and pull-down ears.

I was in the Bolshoi Theatre in 1985 when I came on a trip with dance students and teachers arranged by my Russian mother-in-law who was head pianist of the Ryerson University Dance department.  The country was still recovering from the hardship of the Soviet era, but even then, those who could afford to go to the theatre, dressed up as best as they could. Our trip started in Minsk where we attended classes and rehearsals and performances. Then we went to Leningrad, now St. Petersburg, an incredibly beautiful city, but so cold in February.

At one of the palaces on a tour, I took off my gloves to take pictures and almost got frost bite! My mother-in-law had connections, so while the rest of the group had an excursion to the Hermitage, she and I were able to watch two classes at the Kirov School on Theatre Street, one girls’ class and one for boys. They were stunning. Visitors were normally prohibited, so we were very lucky to know Serge Sorokin, a well known balletomane and dance historian who got us in, all very hush-hush. That is a story on its own for another time.

Unfortunately there was no ballet on at the Maryinsky at the time, but we did see an amusing operetta called Dorothea at the Mali Theatre (which means “little” as opposed to ‘bolshoi’ which means “big”) also on Theatre Street. Our final stop was Moscow where, after a great ordeal, we obtained tickets to see Romeo and Juliet at the Bolshoi, not the original version with Ulanova and not a comfortable experience as we were in a side box with terrible sight lines and where I had to stand to try and see anything. Incidentally the part of Juliet was danced by a ballerina called Pavlova, but of course not the famous Anna Pavlova.