BRINGING IN THE NEW TEAR—With a Flamenco Dancer! 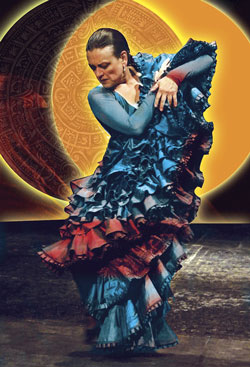 At the stroke of midnight I found my arms around a diminutive Flamenco dancer, her spirit intact despite her advanced years. She pointed out the blue moon. It hovered over us from a heaven’s distance. The moon’s magnetic glow seemed to reach out to us, as if in embrace. The effect was amplified by the contrast of hot embers crackling as we roasted marshmallows and warmed our noses around the campfire on the cobblestone street in front of Aztec Studios. We tossed sparklers into the night’s air when we heard the bells from the church of the Virgin of  Guadalupe at Six Corners ring in the New Year.

I had not known Aida before that night when we hugged under the moon’s magic. She weighed not much more than a bird. I needn’t have worried about the effects of the cold and late hour on her, however, as her chutzpa far outweighed her fragility. Jill, who had brought Aida to the New Year’s Eve gathering despite the bone chilling cold, was determined not to leave until after midnight. The rest of the evening’s revelers left early and most likely were by now asleep in their beds. But Aida was a match for Jill. She stylishly tossed her fluffed boa tighter around her neck to ward off the cold and began telling me her story, as if the evening had just begun. Her accent may have been from Spain or South America, I didn’t ask.

“I would peek out at my audience before I went on stage. I measured their anticipation, and like a barometer, mine would match theirs. But that was before the surge of the dance of Flamenco took me over, then took the audience over in my performance and they did not want it to end.  Who wants passion to end?” Aida almost leapt from her chair when describing the excitement she felt from their applause and their cheers after her performances and of curtain calls the times she almost brought the house down. “But it was the challenge of the apathetic audience sitting in wait for me to go on that gave me my greatest thrills. For them, I must abandon my very being so that the power of the dance can captivate their soul!”

The two of us sat in comfortable silence, both aware that age does not diminish our capabilities, but modifies our expression of it. Yet, the urgency with which Aida spoke, alerted me to the possibility that she was leading up to something that went beyond reminiscence. I glanced up at Jill in question. But Jill, who could still play a mean game of tennis, was preoccupied with kicking at the fire’s embers in an attempt to keep the fire burning.

Aida reached over and took my hands in hers. “I am experimenting with paint,” she said studying me. “I never learned to draw; can I still become an artist, a painter?”

Jill overheard, and in playing devil’s advocate commented, “Jackson Pollack couldn’t draw and he became famous…But, still, I am not sure I consider his dribbles art!”

“You already are an artist,” I said looking Aida directly in the eyes.“ When you can walk into your canvas and paint with the same passion you have for dancing, then you can call yourself an artist whose media is paint.”