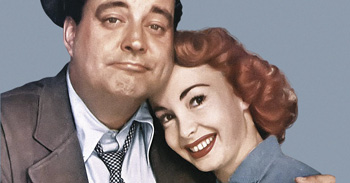 On The Honeymooners, “Ralph Kramden” (played by Jackie Gleason) had a phrase that those of us of a certain age can’t help but remember.  “To the moon, Alice, to the moon!” he would rasp at his wife (played by the inimitable Audrey Meadows) whenever he had no less predictable comeback to her never predictable jibes. Of course, the idea was that this was how far he would knock her.  An upraised fist often accompanied his threat.

The audience, of course, would roar.  So hilarious this empty threat, for America knew that Ralph would never make good on the threat. Even Alice never flinched–supposedly because she, too, knew those words signaled an empty threat.  But underneath those words and the fact that viewers found them to be so hilarious, was the idea that such threatened violence was funny–and, somehow, that such treatment of his wife was a man’s right.

Alice’s only defense was her wicked wit, and unlike many abused wives then and now, she was never really punished for it.  Somehow America knew that if he ever made good on the threat, that Alice would be out the door and probably within a manner of days, on the arm of a man who didn’t weigh 300 pounds plus–a man who made more than the $65 a week Ralph made as a bus driver.

All-in-all, the situation was not very believable–that trim beautiful (sharp-tongued) Alice would ever be wooed and won by fat, acerbic, not-too-clever Ralph required a suspension of disbelief we were well-accustomed to in the early years of TV, not to mention the movies.  From “The Honeymooners” to “Doctor Who,” we were willing to believe anything to be entertained, but the element of violence toward women found so howlingly funny in the Jackie Gleason show was at least not echoed in the wildly implausible “Dr. Who” plots.  There it was highly likely that one would in fact (or in this case, fiction) be flown to the moon–something that never quite happened on “The Honeymooners.”

How far would I go for someone I loved?  Certainly not as far as Alice went. For although it is true that in my lifetime at least a dozen men have “sent me to the moon,” that is beyond the limits of where I’d allow anyone to knock me to!  Yes, I would and have done many things for those I’ve loved.  I have faced up to a gunman, done nursing tasks I never thought I would have done in a million years, faced up to a police captain to release a man  from jail (and succeeded) in a situation I should have had the good sense to know was impossible, and stayed in a country torn by revolution until I knew the man I loved would live, but one thing I would not do is allow myself to be knocked to the ground, let alone to the moon.  Abuse is something I would not take–by a husband, a lover, a parent or a friend.

It was inevitable that one clever cartoonist would come up with this answer to the question, “What did the astronauts find when they landed on the moon?”  Of course, Alice Kramden! But let me tell you, one person she would never have as a companion there is me! “I’d do anything for you, dear,” is a song those of us “of that certain age” will find familiar, but in my case it is not true.  I will not take abuse–either orally or physically–from anyone, no matter how close the connection, and have absolutely no expectations that anyone would take it from me.

Judy Dykstra-Brown posts poetry and essays daily on her blog at:  https://judydykstrabrown.com/