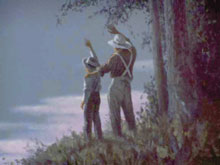 He ran quickly, dashing between others on the crowded sidewalk, displaying exuberance typical, of an eight-year-old boy. Dark curly locks danced in the breeze that his speed created. But, most of all it was his smile which showed perfectly formed teeth, and his intense brown eyes. I was immediately drawn to him.

I was breakfasting with his Papa, a kindly man who offered me a seat at his table. We chatted about various topics including how Michael became father to this intriguing youngster.

Several years previously, my new acquaintance was living with a woman who later turned out to be the child’s grandmother. About nine years ago the woman’s daughter, who was well-known to Michael, came for a visit. She said, “Michael, I have a special present for you,” as she patted her yet flat tummy.

Yes, you guessed it. As did I when he related this tale to me. The boy, whom he later named Michael after himself, was gifted to him before his birth. Shocked at the circumstances, yet fascinated to know more, I asked that he continue with the story, which he did after giving the boy a few pesos for the video store.

Recently young Michael was taken out of school. He was suffering abuse and humiliation by the teachers, not the other students, as we find it occurring in the States. Papa Michael teaches him, math, reading, both in Spanish and English, taking him to historical and scientific museums. Mostly the child misses other children his age. He has made friends with a boy from Chapala. They have gone on an outing to a museum and to eat out. Of course their favorite food is served at McDonalds. Young Michael is disappointed that the boy’s mother has never allowed an overnight visit.

Although Michael was her first born, his mother didn’t want to experience the love and connection found when giving birth. She went on to have four more children, one being a girl whom she attempted to sell to an American couple. The mother of the birth father reported her to the authorities and she was imprisoned for her actions.

Michael’s mother was from Mexico, though this story took place in California. However, today both Michael and the boy’s birth mother and father reside here at Lakeside.

When I mentioned that it might be somewhat uncomfortable living in the same area, my breakfast partner said, “Not at all. I am not judgmental in any way.”

The boy returned to our table one more time while we sat there. He was extremely affectionate toward his father. I felt fortunate to have received both hugs and kisses in return for my smiles and friendly comments.

One day the boy said to Michael, “Papa, I would like for a woman to come live with us. It would be so nice. But Papa, if that does not happen, it will be just you and me, ok?”

It is more than, “Ok” with Michael—the boy has become his existence. In his former life, Michael fathered a family but that was different, as his wife did most of the educating and rearing. This time it is totally on his shoulders, and he loves it.