Sounds of a Mexican Village

I live in a Mexican neighborhood where our streets come alive with sounds beginning early each morning and continue until late into the night. The garbage trucks begin the first movement of a complicated opus. Their emptiness reverberates and echoes as the trucks rattle down the cobblestone street as they begin their early morning collections. During Christmas time, they rattle a clacker to let everyone know they are in the neighborhood and are ready to collect their annual donation.

Soon after, the dueling gas trucks begin their counter melodies as they announce themselves to our inhabitants. One begins with the slow whine Zzzzzzz gaaaaaaasssss, while the other company plays a plucky little tune. Water delivery is announced as the deliveryman shouts “Agua! Aguuuuuuuaahhhhh! Agua!” as he toots his horn.

A soloist on a small pan flute announces his presence in the neighborhood and his readiness to sharpen all of our dull knives. Later on a truck with speakers tied on top of the cab crawls through the neighborhood blaring out the items the junk man will take away in his truck. Interspersed throughout the day are other vehicles with speakers strapped to their car tops or hanging out of their car trunks as they shout out or play the latest advertisement.

Often the car will park alongside the road and play through an entire announcement, and then slowly drive to another location where it will park and rest and repeat. These are several independent movements of the opus. As is the yellow plane which flies overhead, it, too, with a speaker attached, announcing some event.

The produce sellers will park their truck and they will call out the type of produce they offer for the day, and the price of their wares. They will remain a short while, and continue their journey to the next block and repeat their stanza.

During certain times of year, when the circus comes to town, trucks pulling animals in cages attract our attention again with speakers as they hawk the circus, the acts, and the price of the tickets, and park and sell tickets from the cabs of their trucks while the animals pace their cages or sleep in the extreme heat.

And underlying this concert is the hum of the passing of vehicles and livestock. The clatter of the hoofs of the horses and burros alongside the various vehicles; the cars, motorcycles and ATV’s create the rumble, rattle, clatter and clamor of the vehicles as they navigate the cobblestone streets are the percussion to the ongoing musical.

Many cars provide complex counter-melodies when they drive by with their own music reverberating at painful levels and we can feel the bass in our chests as they drive by. Can they even think with the music that loud? Even the parked cars join in with their whistles, whoops and warnings when their alarms go off if someone drives too close to the car, or the bass music was so loud that it set off the alarm.

And in the midst of it all are the dogs that guard their fence lines and property and bark at each passerby to warn them off their territory. Sometime setting off a chorus of other dogs.

The sounds of a village in Mexico are seemingly ceaseless, serenading us from dawn until well after nightfall. They announce the arrival of the many services, advertise and entertain. I once heard a story about a man who moved away from the village back to the Northern part of America who lost his ability to sleep peacefully, until a friend sent him a recording of the street noises in Mexico. He now sleeps like a newborn babe. 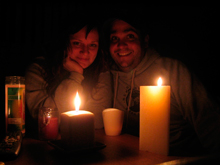