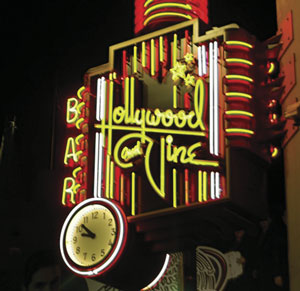 By the time Anna had reached the seventh grade, she was so “star struck” that most of her classmates avoided her. She could be found at the local cinema every Saturday afternoon where she would stay until time to go home for dinner. She spent all of her lunch money on movie magazines holding out just enough money to buy an apple for her school lunch. She became known as “Apple Annie.”

High school presented the opportunity she had long hoped for in that there was actually available a class in drama and acting. The drama teacher convinced the principal that if he would allow the senior class to present A Streetcar Named Desire, ticket sales would pay for a live band for the senior prom instead of a DJ.

Anna was spectacular as “Blanche.” For graduation her parents told her they would take her to Hollywood for Oscar Night. Anna could picture herself as part of the mob outside the theatre, and it wasn’t until they arrived in Hollywood that her father told her he had tickets for seats inside.

The night for Anna was all and more than she had ever hoped for or expected. Then a friend of her father told them there would be a job for Anna at one of his theatres as an usher or behind the drink stand when she returned to Hollywood for her training in drama classes, which her parents had promised her she could do after seeing her as “Blanche.”

Life for Anna in Hollywood was wonderful. Everyday was busy from morning until night, and she especially enjoyed her job selling tickets in the box office of a theatre right in the middle of Hollywood.

Her drama coach arranged for a screen test, and she was signed up for her first acting career in a “B” movie called Lost Love, which turned out to be much more successful than anticipated.

Not long after her film debut she received a call from the secretary of the well-known producer, Mervin Birnbaum of Goliath Productions, for an interview the following Friday at nine thirty.

Birnbaum’s nickname was “King of the Casting Couch,” and more than one would-be actress was known to say, “If you ever go to Birnbaum’s office for an interview, don’t bother wearing your bra and panties!”

The morning of the interview did not begin favorably. A storm had moved in during the night and she had to take a cab to his office building. She was shown into his office and served coffee and nervously waited for whatever may happen next

Meanwhile, in the luxurious home of Marvin Birnbaum in Beverly Hills, the morning for him, after a miserable sleepless night, was a disaster. He reluctantly arose and went downstairs hoping he would feel better after a drink of Scotch and a cup of coffee.

He had not been so alone in as far back as he could remember, with no hired help and a wife who had stormed out in a rage two days earlier and would probably never return. She had been his pride and joy, his fourth and youngest to date, daughter of his closest friend and junior partner. Not only would that friendship come to an end, but he also knew his magnificent career in the movie industry was over.

Two days ago his wife had gone to her doctor for a pregnancy exam only to find out she was HIV positive, which could only be traced directly to him. His exam the following day was even more terrifying, as he was told he had full blown AIDS. Her blabbermouth sister, who never liked him in the first place, had probably already called every gossip columnist in Hollywood.

He reluctantly went to his office hoping only to occupy his mind with something besides the horrors he was facing, and found Anna awaiting his arrival, an appointment which he had forgotten.

He began by telling her about his next film and asked how she felt about partial nudity on the screen. After being assured that she felt she could handle whatever would be necessary, he asked her to stand, slowly remove her blouse and brasserie, throw her head back and close her eyes as if in prayer.

As soon as she complied, he removed a gun from his desk drawer and shot her, yelling, “You young whores have ruined my life!”

As Anna lay wounded on the floor, he could hear his secretary banging on his door, asking what happened. He walked across to the windows, opened one, and stepped out on the ledge. Glancing down at the street fifteen floors below, he looked toward the Pacific Ocean. A beautiful rainbow had formed and the sky was slowly clearing.

As he spread his arms, he recalled the voice of Judy Garland singing, “If happy little bluebirds fly beyond the rainbow, why, oh, why, can’t I?” He was singing it to himself as he stepped off into space.