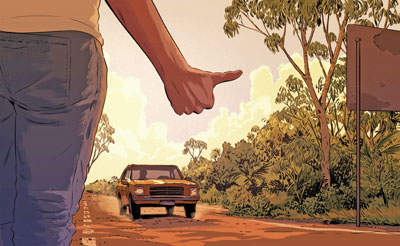 Without a road map or a compass Devin never looked back, for littered along the way in the shadows of memory: the dead leaves of winter feeding a skeleton of roots, hot embers grown cold in the failing light of autumn, footprints in sand left to rip currents, the undertow of a wave of summers all stemming from the luck of the draw in the cutting of the umbilical cord. For an Irish patronymic poet Devin needed more than a turn on a carousel, and crossroads leading to the same conclusion—a budding lust for discovery beyond going nowhere was never enough.

The On Ramp: Taking the on ramp for Devin, an androgynous composite of a bard in search of a poem, turned seasons into years of long and lonely hours along a jumbled maze of interstates, expressways, freeways, and byways. The hitchhiker with a thumb to rival Robbins’ Cowgirl With the Blues, Kerouac’s Beat on the Road; stopping only when the daylight rides were mirages keeping their distance, and in the dark of midnight the headlights red cat eyes that streamed past a shadow hugging a gravel shoulder with an arm outstretched. At times, interminable times, the lone figure tripping on a pathway that gripped his soul was left spinning on a spider’s web, carried on a thermal rise without a solid connection, black ice on a winding road with no turnarounds, on an Al-Sirat journey spanning ocean to ocean, all the while old women sat on the shoulder of time spinning the threads of human destiny, predetermining who passes by, who gets the long ride. Devin never looked back aware waiting long enough something was bound to happen, the inevitability of a resolute star travelling on a one-eyed Ozark moon road weaving like the broken thread of the third fate in a fixed order of the cosmos, where destiny is responsible for everything.

The Open Road: On the long haul through gangs of neon roads, seeking out the hidden locations  of Kennaquhair, hiking along the twisted strands of Saturn’s taillights vanishing into starless nights and Mojave skies, it was all about the music: Johnny Rodriquez “Ridin’ My Thumb to Mexico,” The Dead on a “Black Throated Wind,” Marvin Gaye on a “Hitch Hike,” from St. Louis to L.A., Joan Baez singing “The Hitchhikers Song.” For Devin there were no roadside love songs, no sad songs, no hallelujahs, only the vastness of the open roads that never stopped, like permanent migraines slipping into fog, forgotten roads, mother roads snaking around empty ghost towns of untold stories, promised lives left on dead ends, treacherous roads shaking like a wildebeest’s tail pointing everywhichway, roads where darkness approaches from all angles, roads that wander aimlessly like a child’s magic marker. All roads leading to a point of transition in time from one transition to another; through the final red hue of autumn leaves and the ascension of the ground hog, to the last truck stop and the next.

Thumbs Up: Devin evolved into a tie-dye flower child dressed in beads and bellbottoms, at times Hermaphrodites playing the love of life and freedom scene. As life drove by wearing bumper stickers, “Make Love Not War,” “If it Feels Good Do It,” “Keep on Truckin,” Devin thumbed along through the fog of intimacy and passion, avoiding negativity; at times a daughter of delight, the son of raving ones, a psychopomp guide to the afterlife, a butterfly never to return to the cocoon, dancing down the rabbit hole searching for what would bury the unforgivable, finding temporary refuge in a side road diner, a truck stop sanctuary always with one foot on the ground. Devin experienced the intimacy of stopping now and then, stepping off the highway to explore the pleasures of fellow travelers, a reprieve of wanderlust, soaking up the sun on a playground of self-discovery, tasting a bear’s find of a bee hive, an inside view of the world looking out through a storm window—until—inevitably blinded by the headlights of oncoming with no intention to slow down, pull over and give the hitchhiker a second glance, Devin was going nowhere.

Thumbs Down: Thumbing America through spacious skies, amber waves of grain purple mountain majesties above the fruited plain here, there and back again, had a way of sugar coating the shame and pain. Devin, the Ó Damháin’ of wishful thinking followed the yellow brick road thru open Doors “like a dog without a bone,” a “rider on the storm,” thrown into the dark side of the American Dream, one foot firmly planted, head in the clouds, the white washed phantasm swept by amphetamine speed, no limit signs crystalizing as the fog broke down and cried. There was no turning around for Devin crossing over a bridge to nowhere— END OF THE WORLD billboards in cornfields, braille mile markers, neverending traffic circles and monochromatic stop lights flashing white. Devin stepped off loose gravel into a culvert of Democracy, a sad song, waiting for a caravan of nightmares to run its course, while the brotherhood of sorrows drove past on a trial of tears: a scourge of hatred, a denial of soul, a squander of caring, a wanting of understanding, a revulsion of empathy, a pandemic of greed, all offering rides to the nearest comfort station.

The Off Ramp: Daylight and darkness power played the fiddle while those at the top of the world fed on moon dust, while the children in the dustbin, the unlearned, scarfed on the hot air of burning rain forests, diddled in the ashes of a changing highway to heaven, for the laws of the road had changed forever, never knowing when the sky might break loose, and over mountains, out of the blue, a torrent of temptation and fury leaving him hiking for sanctuary. Having weathered frog stranglers, gully washers, post-holing in deep snow, left to the elements Devin had huddled under overpasses, train bridges’ hunkered downwind of sandstorms and snirts, heltered from burning asphalt hotter’n a blister bug in a pepper patch seeking the sanctuary and shade of a Joshua Tree, a fence post. The horizon under construction, Devin aimed to hitch a ride on a rocking chair on a weathered porch taking the off ramp with thumbs down, ditching the Rand McNally road map, and the cruiser compass in a culvert by the side of the road, settled in a trailer park in a bypassed town, off the vestiges of the decommissioned Mother Road.

Re-tired now with no place to go that Devin hadn’t left behind, satisfaction came with having gained a little wisdom with both feet firmly planted in the gravel of fulfilment for leaving the road travelled litter free for the next hitchhiker to thumb down the road.