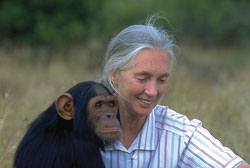 The public image of Jane Goodall is that of a nice lady who has befriended wild chimpanzees, but she is also a multifaceted, renaissance person who is concerned with many global issues. Her latest book Seeds of Hope explores the history of man’s dependence upon plants for food and medicine, and delineates the threats posed to the precarious balance of nature and the world’s food supply by the irresponsible actions of industrial and agricultural interests.

Worldwide, plant nature is being contorted to serve selfish interests. Goodall courageously speaks out against destructive farming practices, genetically modified plants, and the widespread poisoning of the earth. Goodall says, “The corporate greed machine uses any method to advertise and sell its goods.”

She laments habitat destruction in the interests of short-term profits.  Hundreds of square miles of old growth tropical forests are routinely destroyed to produce palm oil for bio-fuel and for inclusion in food products. She charges, “Destruction of the world’s forests is one of the greatest ecological disasters of our time,” and goes on to document the catastrophic annihilation of tropical rain forests and the people and animals who depend upon them.

Timber companies drive roads into the few remaining pristine areas of Africa, opening them to poachers and traders in bush meat and to overgrazing by livestock. Healthy ecosystems are destroyed and replaced with unsustainable monocultures characterized by diminishing water tables and soil poisoned by chemicals.

Much of the world’s cotton is produced by child labor. Children are forced to work in fields while crops are being sprayed. The cotton industry uses $2 billion worth of pesticides per year, 40% labeled hazardous by WHO. Pesticides are the number one cause of poisoning deaths among West African children who are trafficked for the cotton industry. The slave trade is still with us, feeding upon people rendered desperate by poverty and lack of education.

Less than 15% of the North American corn crop directly feeds humans. The remaining 85% is used to produce bio-fuels or to feed factory farm animals in order to satisfy the global demand for more meat.

The widespread introduction of genetically modified organisms (GMO’s) may pose the greatest danger to the present and future health of the biosphere.  We are entering an era of biotechnology in which science fiction becomes dystopian reality.

Corporate propaganda assures us that inserting bacterial genes into plant DNA, causing them to produce toxins inimical to insect pests, will eliminate the need for pesticide spraying, kill weeds without harming crops, cause crops to thrive in a warmer world and produce greater yields for farmers.

However, the Union of Concerned Scientists reports that genetic engineering has not contributed to increased yields of any crops. Insect pests often become resistant to GM plants. The toxins kill beneficial insects, such as honeybees and ladybugs, as well as target species.

The genes of bacillus thuringiensis (Bt) have been inserted into the DNA of such food crops as potatoes, corn, cotton and rice. Five species of superbugs, among them the western corn root worm, have already become resistant to Bt toxins, leading to ever greater pesticide use. The Bt potato introduced into Canada was found to exhaust nutrients from the soil, leading to greater use of chemical fertilizers.

Superweeds are as great a threat as superbugs. Monsanto has created “Round Up Ready” genetically-engineered soy, corn, alfalfa, canola and soy beans, tolerant of their own brand of herbicide. Unfortunately, fourteen Roundup-resistant weeds, including water hemp and Palmer pigweed, now infest ten million acres of US crops.

Spokesmen for agribusiness insist that factory farms are more productive than independent farms, but the independent US farmer has successfully fed and clothed much of the world for generations.

GM crops are not the solution to the world’s agricultural problems, but, rather, pathways into a nightmare future of chemically dependent food production. 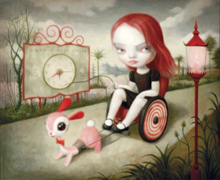 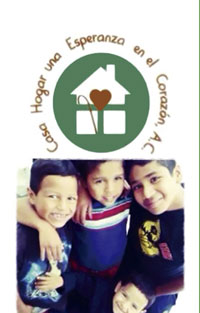