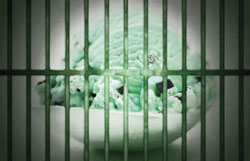 Researchers at Cornell University recently completed an important study. They examined 193 last-meal requests from prisoners on death row in the United States. All but two were from men and all of the men were executed between 2002 and 2006. While the research is important for its general findings and its potential to affect the health of inmates facing immediate execution, the scientists stopped too early. To gain perspective and add depth to the study they could have compared these recent last suppers to the one eaten by another condemned man almost 2000 years ago.

An investigation of this kind must ensure that apples are compared to apples or, in this case, bad apples to the son of God. Two conditions must be met to ensure the purity of results. First, the subjects must know for certain that they are about to die. Second, it is important that the knowledge of impending death does not curtail the condemned man’s appetite. Both of these requirements are fulfilled in the Cornell study and in the earlier case.

As no menu exists from Christ’s last meal, it must be inferred from biblical sources, paintings, historical writings and archaeology. Certainly bread and wine were at the Last Supper. Other possible beverages were water and goat’s milk. Probable foods were figs, pomegranates, dates, olives, beans, barley, peas, lettuce, peppers and lentils. Lamb was unlikely as it was a rich man’s food. Fish was the most plausible meat.

We can see that a middle class diet 2000 years ago in the Holy Land was nutritionally balanced and had little potential to promote heart disease, diabetes or cancer. There is no evidence whatsoever that Jesus contracted any of those diseases in the time between the Last Supper and the Crucifiction.

Contrast this to the modern condemned man. The Cornell study showed that last meals tended to be high in calories and heavy on meat. The most requested items were French fries, soda, ice cream, hamburgers, chicken, steak and pie.

Some statistics: Two-thirds of the condemned ordered fried foods and they ordered dessert at the same rate. Men who were about to die were five times more likely to request soda than milk. Vegetables were not at all popular. The average last meal request contained a whopping 2756 calories—more than twice the daily requirement and especially more than anyone needs to make it to next morning’s execution. Some last meals added up to more than 7200 calories.

I don’t know what it says about the tastes of condemned men but a number of them requested takeout from McDonald’s, KFC and Wendy’s. One prisoner ordered 12 pieces of fried chicken, two buttered rolls, mashed potatoes with brown gravy, two sodas and a pint each of strawberry and vanilla ice cream.

Two specific examples are illustrative of where we are and where we might go in the future. I interviewed Mad Dog Jeffrey, a notorious 12 year-old delinquent just before his execution. He was convicted of smothering his babysitter by holding her face down in a bowl of mashed potatoes. “She tried to stop me from eating my favorite dessert—an Ooey Gooey Chewy Sunday with added chocolate sauce,” he says, “and all because I didn’t want my veggies. It was an accident. I did what any meat-loving kid would do only I didn’t mean to hold her down that long.”

He shrugs and grins. “I’ve lost all my appeals but I win anyway. My last meal is an Ooey Gooey Chewy Sunday.”

I also interviewed Anthony “Skinny Boy” Trafalger, a new breed of condemned man who has a short but healthy future because of proper eating habits. His new landlady expired not long after he left home to attend college. “I was spending every nickel on tuition and books,” he says. “I didn’t have anything left over to buy nutritionally suitable meals. I don’t know how many times I told her that I was vegan but every meal was meat, meat, more meat and chicken. The last straw was one morning when she served up bacon and eggs. I had requested fruit and soy yogurt. In a hunger-induced craze, I choked her by holding two strips of bacon over her mouth while I beat her with a frozen hamburger patty. It was an accident—I only meant to scare her.”

Skinny Boy looked at his watch. “Tonight’s my last supper and I can’t wait. I’ve ordered celery sticks with natural peanut butter and an all-vegetable salad with olives topped off with a glass of lemon water for dessert. I’m sorry for what I done but it was almost worth it to get a decent meal.”

Perhaps it’s time to examine the policy that allows prisoners who are about to be executed to order their last meal. It’s clear that, unlike yesteryear, most of these meals violate the rules of healthy eating and have no rehabilitative effect whatsoever. It’s also clear that no recently executed prisoner has ever risen from the dead. Perhaps diet is to blame. There is also evidence that some homicides are committed in order for the perpetrator to eat to his heart’s content on his final night. Is it really necessary for taxpayers to foot the bill for a convict’s last Big Mac?

(Ed. Note: Neil is the author of Tuckahoe Slidebottle (Thistledown Press) which was a finalist for the Stephen Leacock Humor Award and the Howard O’Hagen Short Fiction Award.)