The Time the U.S. Navy Came to Lake Chapala

By Dennis A. Crump 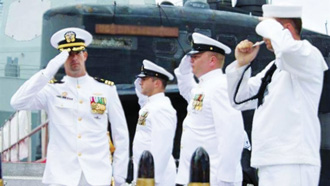 It was in the early 1960’s when a US Navy battleship, destroyer, and submarine appeared on Lake Chapala to engage in battles against the Japanese. As a young teenager, it was intriguing to witness the battles unfolding—battleships with the big guns blasting their massive power at the enemy, the submarine performing its underwater attacks, and the destroyer charging around to protect the battle group.

I’m sure there are few that remember those battles. As a matter of fact, the battles on Lake Chapala aren’t even recorded in the filming locations where Otto Preminger’s In Harm’s Way with John Wayne, Kirk Douglas, and Henry Fonda had been filmed.

One day, we teenagers were informed by our friend’s dad, Jim, that we would not be able to use the ski boat for awhile because he had rented it to a camera crew to film battles for an upcoming movie. It wasn’t until sometime later we learned the name of the movie was In Harms Way.   This was in the day when Cool or Rad had not yet caught on in our early teenage vocabulary, everything at that time was “bitchin.” And – these perfect scaled down navy vessels were incredibly “bitchin,” complete with their big guns firing heavy projectiles, destroyer firing its guns, (can’t remember if they dropped “depth charges to disable enemy subs), and the submarine cruising in stealth mode, don’t remember if they fired torpedoes either. But it was “bitchin’” to watch them cruising around off shore and engaging in battles.

Lake Chapala waters turned out to be the perfect setting for these scaled down vessels. The waves were proportional in size to the scaled replicas, almost in every condition, from smooth seas to heavy Pacific storms. And with a little imagination, the lirio – hyacinth, may have appeared to be small islands in the South Pacific.

From what we understand from second hand sources, filming went well except in the maiden runs. Our ski boat was retro-fitted with a large platform for the cameraman and crew.   A local Chapala “lancha” skipper was hired to drive the boat. However, apparently there were a couple of insurmountable challenges where the crew could not effectively communicate with him, and his attention and focus was most often concentrated on the battleship, sub, and destroyer and battle scenes themselves, not on the cameraman and director giving the signals where to go.

This minor detail was corrected by enlisting one of our group to drive the boat instead. From their account it was lights camera, action and smooth sailing for the rest of the filming. We didn’t learn who the stars or cast were until much later, not until after the film came out.

One Saturday, the owner of the boat yard told me that I would be working on the 54’ Chris Craft that had just been brought into dry dock. It would require special care and attention, and the owner would pay “very well” separately from my regular paycheck. I was busy cleaning and spit shining everything to perfection.

About mid-afternoon, I heard a voice behind me say, “Looks great! How ya doing, son?” Turning around to thank the voice only to be looking up at John Wayne. Stumbling and speechless, I could only summon a “Thank you, sir. I’ll be done before the end of the day.” I still didn’t know he was the star nor had I seen In Harm’s Way.

Life was always interesting for us teens in Ajijic and Lake Chapala. It was fun to watch the filming when we had the chance. It was also fun to get “our” ski boat back so we could resume our weekend water skiing and boating activities once again.