By Ralph F. Graves
From the Ojo Archives 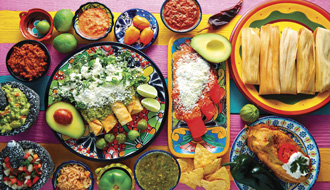 A meal fit for a king! You´ve probably enjoyed any number of them here without realizing it. The fact is, many of today´s typical Mexican dishes are comprised of much the same ingredients served to the royalty of Mayan, Toltec, Aztec and other ancient civilizations.

The cuisine of Mexico, based on corn, is one of the world´s oldest, dating back to cultures that flourished over 6000 years ago, and although corn was the mainstay of the ancient Mexican diet (it was even worshipped as a god in early times), many other foods in current use were also included. Tomatoes, chiles, beans, avocados, pumpkins, even cactus leaves were then, as now common elements in everyday meals. From these and other ingredients, augmented by herbs and condiments, today´s delectable Mexican cuisine evolved.

Think back to the last typical Mexican meal you enjoyed. Perhaps it included a rich zucchini soup, an entree of chicken in pine nut sauce with guacamole salad and a basket of steaming tortillas. Or was it chiles rellenos or grilled red snapper or a bowl of pozole with a side order of refried beans? Or just a snack consisting of tacos, enchiladas, tamales or quesadillas washed down with a mug of hot chocolate? If you feasted on any of these, you were dining in the style of ancient Mexican royalty.

The cooks of Moctezuma´s courts are said to have whipped up over one hundred different dishes a day to please the demanding palates of the ruling hierarchy. Seasonal fruits and berries were always included; fresh fish and seafood were transported from coastal areas daily by teams of runners.

Wild game and domesticated fowl were common and root vegetables, corn beans, tomatoes, squash and other vegetables were eaten as individual dishes or combined in thick stews and soups.

With the coming of the Spanish, new domestic meats (pork, mutton, goat) were incorporated into the cuisine and the French invaders later added their special influence. But most of the basic foods developed and enjoyed by the ancients persist in the Mexican cuisine of today.

Corn (maize) was cultivated here as early as 800 B.C. according to carbon dating analysis. As Mexican civilizations developed, it became an integral part of the diet, forming the basis for the masa, or corn meal dough, from which tortillas and a host of derivative foods (tacos, sopes, enchiladas, panuchos, gorditas, to name just a few) are made. Then, as now, ground corn was made into a gruel (atole); kernels were made into hominy (pozole); and whole ears were roasted and eaten steaming hot.

For centuries, beans provided ancient Americans with their primary source of protein. Many of today´s varieties resulted from the cross breeding of earlier species. Centuries ago, indigenous people learned how to preserve beans by drying them. They were then cooked slowly with water, meat and herbs in large clay pots a method which has changed hardly at all over the years.

Chiles are another staple with ancient roots. A number of varieties were cultivated by the early Aztecs who used them to cook and season wild game. Later they became a primary ingredient of the rich, spicy sauces used to accompany any number of dishes. And, of course, some varieties are still stuffed, cooked and eaten as a main course.

Modern Mexican cuisine includes countless preparations of chicken, beef, pork, veal, lamb and seafood. But meat, fish and fowl were no strangers to the ancient cuisine, and many of the same types are found in today´s menus. In the Yucatan, pheasant and deer were (and still are) domesticated. Turkey, rabbit, duck, pigeons and turtledoves were hunted and trapped in other areas. Iguana, turtles and frogs are still considered delicacies in some regions, and of course, fish and seafood abounded in coastal waters as well as in lakes, rivers, and streams of the upper plateau.

Fruits and vegetables were plentiful, mushrooms and herbs were used to cook with and were also ingredients of curative potions and ritual concoctions. The flowers of squash and other plants were used in soups.

The ancients enjoyed some of the same beverages, as well, as intoxicating brews made from fruits, grains and cactus were generally restricted to the priests, who used them in ceremonial proceedings. Chocolate was more widely available, but since the cacao beans were valued so highly, only the well-to-do could afford what is now one of the most popular beverages in Mexico. The beans were crushed and steeped in boiling water, sweetened with honey and spiced with cinnamon and vanilla. Sound familiar? The Spanish Conquistadores became so addicted to this drink, the Catholic Church subsequently outlawed it as “immoral and provocative.”

So as you can see, the roots of many Mexican culinary delights are deep indeed, producing gastronomical rewards unequalled by few other regions of the world. And, if you´ve never experienced a meal fit for a king, try a typical mexican dish. You can´t miss. Buen provecho. 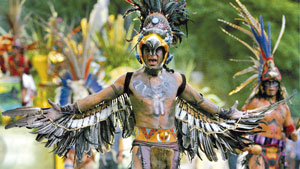