Viva Bus Trips to Teatro Diana for the Met Opera

Saturday October 7 Norma by Bellini, with Sondra Radvanovsky as Norma and Joyce DiDonato as Adalgisa. The tragic role of Norma includes many beautiful arias. It has been a launching pad for many distinguished sopranos. (3.3 hours) Bus departs at 10:30 am.

Saturday October 14 The Magic Flute by Mozart, with Golda Schultz as Pamina and Kathryn Lewek as Queen of the Night. This is one of Mozart’s most popular operas, both moving and witty. (3.4 hours) Bus departs at 10:30 am.

Saturday November 18 The Exterminating Angel by Thomas Ades, the third opera by this British composer, based on a famous surrealist movie, with Audrey Luna as Leticia Maynar and Amanda Echalaz as Lucia de Nobile. It has an “urgent and apocalyptic intensity.” (2.5 hours) Bus departs at 10:30 am.

Trips to the opera are 450 pesos (550 for non-members) and are available at the LCS ticket booth Thursday and Friday from 10 to noon, or call Rosemary Keeling at 766-1801.

SINGING ON A STAR

“Singing on a Star” runs October 8 and 15, all Sundays, from 4-6 pm, at La Bodega. There will be bar service an hour before the show and during intermission.

The popular new Lake Chapala Chorale has put together an all-Broadway revue of hit showtunes everyone loves best. If you enjoyed this vivacious group’s Christmas and Spring concerts, director Cindy Paul says you’ll come away from this one “high as a flag on the Fourth of July.” 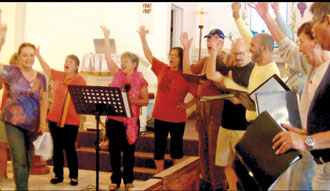 The Chorale in Rehearsal

Advance tickets for only 150 pesos are now on sale at Diane Pearl Colecciones and Mia’s Boutique, and for 200 pesos at the door, if available.

October 8  The Witty Wise Words of a Silly Serious Man

Tom Nussbaum claims to be among the world’s silliest serious men. He says he’s seen the list and he’s #17, and blames his low rating on the gridlock in Washington, D.C.  Nussbaum will perform excerpts from his comic scripts, three novels, and memoir.  What members of Ajijic’s Writers Group have discovered when listening to Nussbaum is that he does not simply read. He entertains. His works range from absurd silliness to painfully serious topics. The audience will laugh, think, and learn. 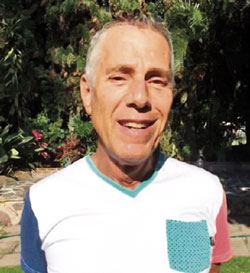 October 15 Does Education Need a Revolution?

With the advent of the Internet and communications technologies, the new generations approach learning their own way. Traditional methods and systems have already become obsolete and create a state of boredom in our students. There’s a movement that’s catching enormous momentum in countries like Sweden, Finland, Spain and in South America. The result is a revolutionary open-source method that is changing education forever.

Carlos Martínez Escalona is Professor of Philosophy and Physics at Panamerican University, Guadalajara, with degrees in Philosophy, Engineering, Education and Journalism.

Americans are killing themselves with drugs like never before. More Americans died from opiate overdoses in 2016 than were killed in the Vietnam and Iraq wars combined. One out of every eight Americans suffers from an alcohol-related disorder, a 50% increase over the previous decade. The American dream has become a nightmare for some, and unfortunately there’s no single cause we can point to as a source of the problem Is there anything to be done?

Pete Soderman facilitates a local SMART Recovery® meeting and is the author of Powerless No Longer: Reprogramming Your Addictive Behavior.

Events at the end of the nineteenth century conspired to ensure that Lake Chapala became a powerful magnet for foreigners and has remained one to this day. However, without the vision of a handful of determined individuals, such as Septimus Crowe, Chapala and Ajijic might still be languishing in relative obscurity. I will share stories of some of these individuals and their contributions to the area, while arguing that the commonly accepted history of these early days deserves a drastic rewrite.

Former Jocotepec resident Tony Burton is the author of several books about Mexico, including Western Mexico, A Traveler’s Treasury (2013) and Mexican Kaleidoscope: Myths, Mysteries and Mystique (2016).

A belief is not an idea the mind possesses but rather an idea that possesses the mind. Beliefs are not based in truth! They are mere filters the mind uses to understand and negotiate our world. They are subconscious mechanisms the mind employs to defend against our fears. However, our beliefs may actually perpetuate anxiety. David will explore the possibilities available when we live beyond belief and disempower the mind’s unconscious insistence to be in control.

Last year the September meeting of the Ajijic Book Club focused on One Step Ahead by Jack Prins. His daughter Nomi, also a writer, had published her book All the President’s Bankers.

Come and listen to Nomi’s narrative of how an elite group of men transformed the American economy and government, dictated foreign and domestic policy, and shaped world history. 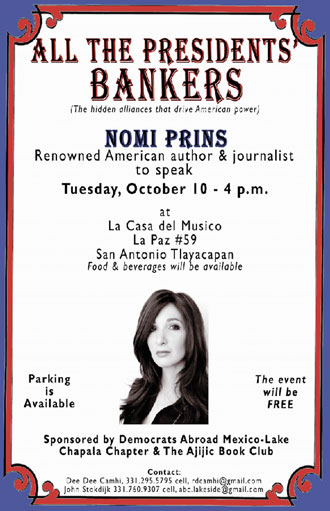 All of these are actual performances recorded in stunning high definition before live audiences and shown on LLT’s 14x8 foot screen.  Still to come are:

This is exciting news for music and ballet lovers. Here are Viva bus trips to the 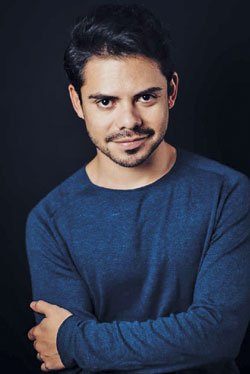 All theater seats are premium orchestra seats. Trips to the Symphony are 450 pesos (550 for non-members). Tickets are available at the LCS ticket booth Thursdays and Fridays 10 to noon, or call Rosemary Keeling at 766-1801.

SAVE THE DATE FOR THIS ONE

Centro Cultural Gonzalez Gallo in Chapala is the setting for a recital of Spanish and Mexican music by four very talented músical artists. The date is Sunday, October 22 at 4:30 pm. Tickets at 100 pesos will be available from 3:30 p.m.

The recital is a mixture of songs and some zarzuela duets, by composers García Lorca, Obradors, Moreno Torroba, Penella, Ponce, Elizondo and  Del Moral.

The next production from Naked Stage is My Old Lady. It’s directed by Liz White.  Performance dates are October 27, 28, 29 at 4 pm.

Here’s the plot: Mathias, a nearing-60, down-on-his-luck New Yorker thinks his fortunes could be changing when, after the death of his estranged father, he learns he has inherited a vast Paris apartment that could be sold for a handsome sum.  But, of course, there’s a catch: his apartment is already inhabited by Mathilde, a refined and feisty 90-something retiree, and Chloé, her beautiful but tart-tongued daughter...and they have no intention of leaving! 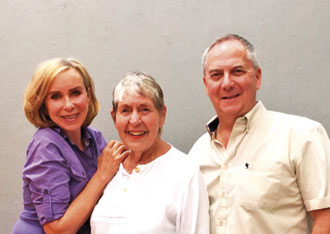 YOU GET TO SEE THE PRETTY ZOMBIES…..

……that’s if you come to the annual “Thrill the World” dance event at the Ajijic Plaza on Saturday, October 28 at 4 pm.

You can also be a zombie by joining in rehearsals at the Ajijic Cultural Center from 1-3 pm. Rehearsals will continue each Saturday until the October 28 event.  There are also Wednesday rehearsals from 5-7 pm.

Event planners have chosen Tepehua and The School for Special Children, AKA School for the Deaf (located in Jocotepec) as the beneficiaries of this year’s event. 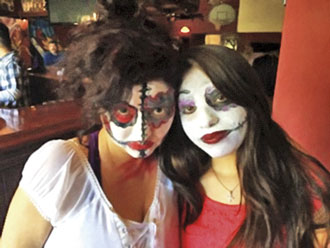 How can you lose? Every Wednesday at 1 (play starts at 1:30) local citizens gather to enjoy the adrenaline rush of playing bingo. A new added feature is the introduction of tastings of tequila, wine, fruit candy, chocolate, Mexcala Crème and other delights.  Tastings will be held once a month from 12:30 to 1:30 and at the 15 minute break.  Goods will be for sale, too.

Bingo Players on the Verge of a Big Win

Bingo Lago is a benefit for Have Hammer, where students learn how to do detailed carpentry work: furniture, cabinets and the like.  The maestro’s salary is paid by the proceeds from the bingo games and other fundraisers. For more information, contact This email address is being protected from spambots. You need JavaScript enabled to view it.. 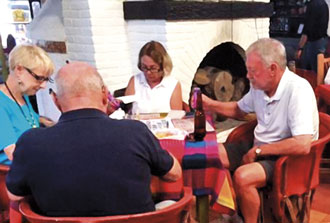 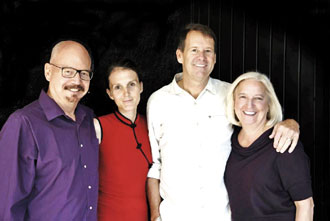 The play explores the lives of Sarah and James, a couple who work as journalists documenting the horrors of war. When they return from covering the war in Iraq, they are physically bruised and emotionally beaten. While they are recovering, their best friend, Richard, brings his new, young girlfriend to visit. This burgeoning relationship makes James and Sarah examine their own relationship and way of life.

The performances are at 7:30 pm and 3 pm. First Saturday and both Sundays are matinees.

Tickets are 250 pesos and are available at LLT’s Box Office, 10 to noon every Wednesday and Thursday, also one hour before curtain. Email: This email address is being protected from spambots. You need JavaScript enabled to view it.  or call (376) 766 0954.

LET’S GET MORE AMBULANCES ON THE ROAD 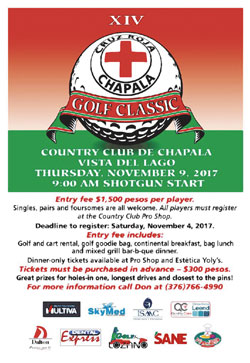 Last year the club was able to provide the seed money for the purchase of a brand new ambulance, the first in 30 years! For information on the festivities call Don, 766-4990, or Ramiro at the pro shop, or call the Country Club de Chapala at 763-5136 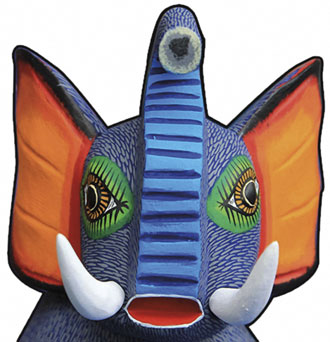 IT’S ALMOST THAT TIME OF YEAR

Book early for Christmas at Jaltepec Centro Educativo for their traditional Christmas dinner or lunch prepared and served by the students. Musical Director Timothy G. Ruff Welch and Los Cantantes del Lago will entertain as a special contribution to this festive occasion.

Contact Linda Buckthorp at 766-1631 or email This email address is being protected from spambots. You need JavaScript enabled to view it. to book now.