The story: Wolfgang Amadeus Mozart, a rowdy young prodigy, arrives determined to make a splash. Awestruck by his genius, court composer Antonio Salieri has the power to promote his talent or destroy it. Seized by obsessive jealousy he begins a war with Mozart, with music and, ultimately, with God.

Viva la Musica is presenting a nice array of musical productions this spring. Here is what’s going on in June.

Thursday June 8  “Bach, Beethoven and Brahms” Bach Little Fugue in G Minor, Beethoven Trio Concerto for Violin, Cello and Piano and Brahms Symphony No. 2. The bus leaves at 4:30 for dinner at a fine restaurant before the concert.

Tickets are available at LCS on Thursdays and Fridays from 10 to 12, or call Rosemary Keeling at 766-1801.The cost will be 450 pesos for members, and 550 pesos for non-members. The bus leaves from the carretera close to Farmacia Guadalajara.

June 11  Exponential Technologies: A Road to Nirvana or to the Disappearance of the Human Race? 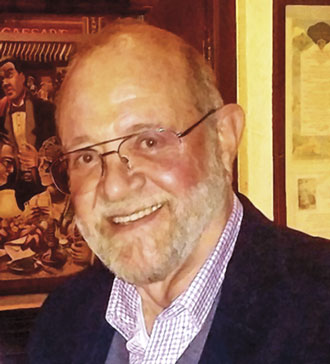 Previous technological revolutions have allowed us to adapt gradually over a period of years. Industry 4.0 is changing things at lightning speed. What will be the changes that Artificial Intelligence, 3D printing, synthetic biology and robotics, e.g., will bring to our lives? What are the social, economic, and ethical issues we will need to face? Will playing God end the human race as we know it?

Dr. Morris Schwarzblat is a nuclear physicist with ample experience in academia, research and industry. He has worked in Mexico and in Canada, where he lived for sixteen years. Morris represented Canada as a member of the Co-ordinated Research Program on Artificial Intelligence at the International Atomic Energy Agency in Vienna. He is currently Director General of Science and Technology Development at the Ministry of Innovation, Science and Technology of Jalisco.

Those familiar with Mark Sconce’s dramatic readings and Olga Kaplounenko’s vocals will not want to miss this Sunday’s presentation. Their main theme is poignancy, followed by whimsical, frivolous poetry and song to make you laugh out loud. Mark’s wit, stage presence and obvious love of poetry will be on display, and Olga will back up his readings with her favorite soulful songs. Prior performances at Open Circle have earned them an enthusiastic following.

Mark is Contributing Editor and Essayist for El Ojo del Lago. Olga, born and educated in Moscow, earned a Masters in Electrical Engineering and also studied jazz vocals in Moscow Jazz College. At Lakeside she sings with Los Cantantes and has performed in several plays at LLT. 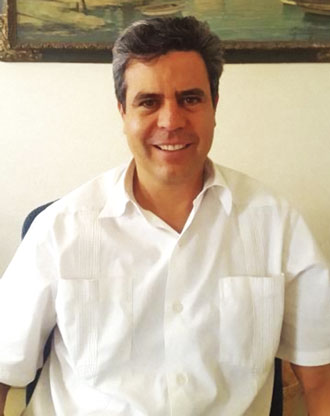 Luis, local Attorney at Law and Notario Público, has worked during the last 17 years in water-related projects as an independent consultant at all three levels of government, as well as for not-for-profit and international organizations. His primary legal expertise lies in water governance, aligning the interests of and resolving conflicts among stakeholders in the water sector.

He will speak about what is happening with water policy in Mexico, what is being done to address problems of water pollution, scarcity, and usage, as well as projects to clean the water of rivers and lakes in Mexico, specifically of Lake Chapala. He will address government policy with regard to big infrastructure projects and issues related to the human right to water and how to implement better policy for both surface and underground water in Mexico.

July 2  How to Be Fluent in Spanish in 40 Minutes

Most of us would like to be able to speak Spanish, but many consider it too daunting. New research in second language learning has revealed something quite surprising. You can learn a language by using a language.  Although this sounds a little paradoxical—using a language you don’t know to learn the language—it works!  And it’s more fun than learning grammar rules!

Phil Rylett started teaching English as a second language after retiring as a systems analyst.  He discovered the traits of the successful language learner from observing his students.  And he began to realize true communication does not come out of a book. Phil has lived in Ajijic for four years and though he arrived with only rudimentary Spanish, he has trained youth soccer teams here and has participated in many other traditional village activities. 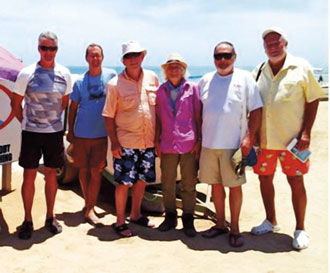 The Ajijic Fishing Club recently enjoyed a full three days of fishing at Cabo Pulmo, a village on the East Cape of Baja California.

Members caught yellowfin tuna, red and yellow snapper, trigger fish and surgeonfish. They  ate as much as they could: sashimi, tuna steaks, ceviche and fried and grilled white fish for tacos prepared by the restaurant. They gave the rest to the villagers. A good time was had by all, as the saying goes.

The club meets on the first Monday of the month at 9 am, at Dona Lola Restaurant, west of Ajijic on the lake side.

For information about the club, check their website: http://drhook50hp.wixsite.com/

AN EXCITING YEAR TO COME

Lakeside Little Theatre has announced its offerings for the 2017-18 season. Look for further announcements. Season tickets will be available in September.

SUMMER IN THE VILLAGE

Viva  la Musica is offering a “Summer in the Village” Series, priced at 300 pesos per concert, or 800 pesos for the package of three events.

Tickets are available  at the LCS ticket booth on Thursdays and Fridays, 10 to noon and at Diane Pearl Colecciones and Mia’s Boutique.

This month members of ABC will read and discuss a book with a strange but meaningful title - Thank You for Being Late: An Optimist’s Guide to Thriving in the Age of Accelerations, by Thomas Friedman, the Pulitzer Prize winning New York Times columnist.

In this latest bestseller, Friedman addresses three large forces reshaping our world, all which are accelerating. ABC will meet at Just Chillin’, at Constitucion #32, on Tuesday, June 27at 4 pm. For more information  contact Initiating Member John Stokdijk at This email address is being protected from spambots. You need JavaScript enabled to view it..

DOWN WITH CORPORATE RAIDERS

The Naked Stage play for June is “Other People’s Money.” It is directed by Patricia Guy. The show runs June 23, 24 and 25. 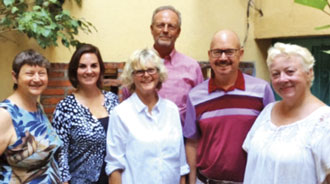 A Wall Street raider threatens a hostile take-over of a “mom and pop” wire and cable company. The patriarch of the undervalued company is faced with the task of protecting his company, his family and his employees while maintaining his integrity.  He enlists the help of his wife and her daughter, who is a lawyer, to try and protect the company. The raider and the lawyer enjoy the thrust and parry of a legal battle as he tries to win her heart. This compelling drama explores whether corporate raiders are monsters of capitalism or realists.

Naked Stage is in Riberas del Pilar, at Hidalgo #261, on the mountain side and directly across from the Catholic Church.  Reservations are recommended. For more information and reservations, email This email address is being protected from spambots. You need JavaScript enabled to view it.. For those who use Facebook, look for The Naked Stage for breaking news and updates.

READ THIS, LOVERS OF BALLET

The Lakeside Friends of Ballet de Jalisco is a loosely formed group of ballet lovers who have been amazed at the high quality of this very talented classical and semi-classical ballet company.

A fundraiser was held in April at the home of Blair Ferguson, and included a slide show, champagne and gourmet hors d’oeuvres, a silent auction and raffle, and a barre demonstration.  A 42,200 peso donation came from the event, and it was handed over in full at the end of the evening to the Company Director, Dariusz Blajer. 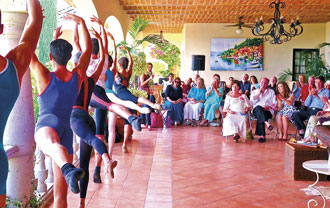 The company expects to be able to use this money to bring in as many as four professional coaches from various parts of Mexico, each to work with the company for an entire week. The first fundraiser in January raised the money to provide more point shoes to soloists.

This professional ballet company is the only one in the State of Jalisco. It’s financed under a State financial trust, which doesn’t begin to provide many of the things that a company needs, with a goal of becoming a leading performance group with international  recognition.

For more information, contact Suzanne Salimbene at This email address is being protected from spambots. You need JavaScript enabled to view it..

The Veggie Growers Club has been meeting for three and a half years. They meet at Huerta Organic Café, Hidalgo #212 in Riberas del Pilar on the second Wednesday of the month at 10 am, unless members are notified by email that they are meeting at a member’s house.

As part of their Playhouse–Actors Studio series, Lakeside Little Theatre is pleased to announce The Shakespeare Project.

Join the workshop. Topics include: An overview of English Renaissance Theatre; Shakespeare, the man and his works; vocalization and the language of Shakespeare; scene study and basic acting techniques in Shakespeare’s plays; and the Shakespearean soliloquy.

This workshop is for Season 53 Lakeside Little Theatre members only and is offered at no charge. Existing members will have preference, but if you are not already a Season 53 member or season ticket holder, and space is still available at registration, you may purchase a membership on the first day for 300 pesos.

The three days of the workshop are Monday, June 26, Friday, June 30 and Monday, July 3.  Participants must have performed in at least one play at Lakeside or elsewhere.

The instructor is David Goldman, veteran of the American Conservatory in San Francisco and The Drama Studio in London. 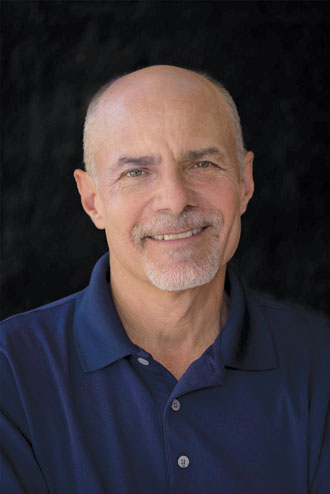 “Visits to the Guadalajara Flower market, a boat to Scorpion Island, or a garden crawl, all feature on this year’s calendar.  With our membership  of  20 plus a strong monthly turn out topping over a dozen, we have scope to explore so much more’: said Carol Curtis, Webmaster and secretary of the Westenders’ Garden Group.

The group meets on the first Monday each month. New members are always welcome. contact Carol Curtis at This email address is being protected from spambots. You need JavaScript enabled to view it. 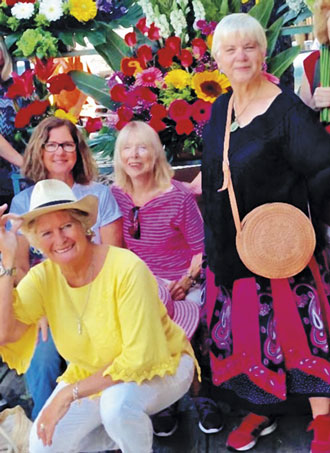