…..if you’re interested in Lakeside Little Theatre’s next Broadway HD show in their Playhouse Series, She Loves Me. It is presented in just a couple of days, April 8 at 7:30 pm and April 9 at 3 pm.

Roundabout Press notes, “it’s a heartwarming musical comedy classic about finding love the good old-fashioned way. It follows Georg and Amalia, two parfumerie clerks who aren’t quite the best of friends, but they’re anonymous pen pals. Will love continue to blossom once their identities are finally revealed?”

To find out, call LLT at 376.766.0954, or email This email address is being protected from spambots. You need JavaScript enabled to view it. to have a shot at getting tickets….or just show up one hour before the performances. This promises to be a delightful way to spend a few hours.

April 9 How to Love the World 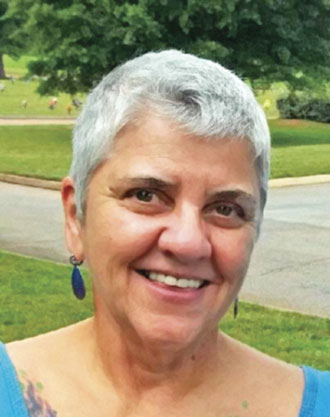 “My work is loving the world,” declares the great contemporary poet Mary Oliver in a poem called Messenger. To hearten and steady us during the current climate of cynicism, Susa Silvermarie will give us Oliver’s and others’ poetry in an inspirational program called How to Love the World.

Spoken word artist Silvermarie is a new permanent resident of Ajijic. She is a widely published and anthologized writer known for her own original work that delights the senses while calling the spirit. Hers is a voice that can wail, whisper, conjure and cry. A Silvermarie performance invokes change in her audience and her message is always full of music. Look for her E-book, Tales from My Teachers on the Alzheimer’s Unit, on Amazon and all platforms. She invites you to visit her at www.susasilvermarie.com

Gene Basin, author of Becoming Your Best Self: A Theoretical and Practical Guide to Personal Transformation from Duality to Unity, believes that practicing certain simple mental and physical exercises can enable us to take total responsibility for our life, a life in which feeling good is our normal everyday state. He maintains his approach provides all the necessary tools to accomplish our goals and arrive at our desired destination.

Gene Basin’s life is an example of the Becoming Your Best Self philosophy. A political refugee, he fled the USSR in 1975 with few possessions and little money, knowing only a smattering of English. A well-known Russian artist, he founded the first US art-in-exile gallery in NYC and then founded galleries in San Diego, LA, and Palm Springs. He earned a doctorate in 1991 in Clinical Hypnotherapy from the American Institute of Hypnotherapy and became a Master NLP practitioner. He defines his life’s purpose as helping people become happier and healthier.

April 23  Is Your House Making You Sick?

When investigating what ails us, we seldom consider our home as the main cause. Environmental medicine is a rare specialty in allopathic medicine. Pesticides, herbicides and smog are acknowledged pollutants, but we must also consider biotoxins produced by microbes, molds, and fungus in our homes, offices, and cars. Sick building syndrome (SBS) is a frequent cause of several chronic conditions that physicians easily dismiss because lab tests appear normal. Commonly overlooked symptoms are fatigue, depression, ADD, pain, memory problems, respiratory infections, unexplained weight gain/loss, or sensitivity to bright lights. Dr. Bea will explain how to detect mold in your home, wipe it out, and prevent recontamination.

Dr Gallagher practices Functional Medicine and Clinical Nutrition in the Chapala area. She applies a wide variety of metabolic, nutritional and environmental tests to discover the underlying causes of chronic conditions. Foods, nutritional supplements and colonics are among tools she uses to help patients to recover health. Last year she finished a “Specialty in Anti-Aging Medicine and Ozone Therapies.”

Physicists, philosophers, and poets have been fascinated by quantum physics for nearly 100 years. What actually is quantum theory and why has it intrigued such a broad spectrum of society, as evidenced by book titles ranging from Quantum Reality, Quantum Enigma, and Quantum Healing to Quantum Poetry, Quantum Forgiveness, and Quantum Spirituality? Pam will explore these questions from a broad perspective ranging from science and medicine to philosophy and spirituality. She will consider the question, “What does quantum physics tell us about the nature of Reality?”

Pam Wolski was a book editor and a teacher of writing and math near Chicago, Illinois, before moving to Mexico with her husband, Tom, in 2013. Quantum physics has fascinated her for 10 years, and she enjoys learning how it has been applied, actually and metaphorically, to so many areas of life.

Have you ever wondered what local Mexican government entities are doing to protect our natural environment in the Lake Chapala region? Learn about aquatic weed management, environmental education, efforts to combat and adapt to climate change, and the creation of natural protected areas surrounding Lake Chapala,

Cara Pratt grew up in Kenosha, Wisconsin. After graduating with degrees in Environmental Policy and International Relations from Drake University in Des Moines, Iowa, she joined the United States Peace Corps in rural Paraguay working in grassroots environmental conservation. Cara spent four years promoting reforestation in Paraguay, and now joins us as a United States Peace Corps Response Volunteer working in natural resources management with Aipromades (Inter-municipal Association for the Environmental Protection and Sustainable Development of Lake Chapala) in Chapala.

The annual Sunday at the Movies series sponsored by Democrats Abroad is happening now. Here are the offerings for the next weeks. 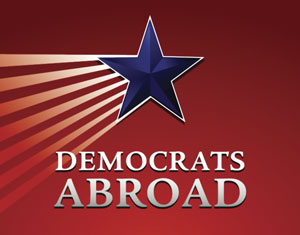 April 9 I Am Not Your Negro Powerful documentary that takes a deeper look at race relations, white supremacy, and the resistance to it, through the works of James Baldwin, novelist, essayist and playwright

April 16 Fire at Sea  2017 Oscar nominee for Best Documentary Film.  A moving example of the humanitarian crisis in the seas around the Mediterranean island of Lampedusa, the first port of call for thousands of African and Middle Eastern refugees hoping to make a better life in Europe. A “must see.”

April 23 The Best Democracy Money Can Buy: Tale of Billionaires and Ballot Bandits  Investigative journalist Palast examines the impact of big money in politics in the US and the disintegration of the integrity of our elections through voter suppression and rigged and  bought elections.

April 30 Do Not Resist Stunning documentary that looks at the current state of policing in America.

BE READY TO GET HEART-RENDED

Viva la Musica has a bus going to Guadalajara for the last opera of the season, on Saturday, April 22. The production is Eugene Onegin by Tchaikovsky. Anna Netrebko stars once again in one of her most acclaimed roles as Tatiana, the innocent country girl in this heart-rending opera. (Bus departs at 10.30 am)

Bus trip tickets are available at the LCS ticket booth on Thursdays and Fridays, 10 am to noon.  The cost for members is 450 pesos and 550 for non-members. 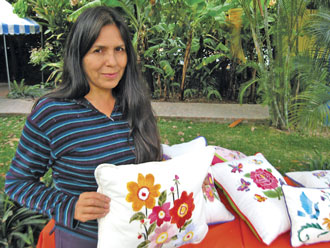 What this means in English is that there are classes at the Lake Chapala Society in the traditional art of artistic embroidery.

It’s possible to enroll at any time. While the classes are in Spanish, English speakers can easily follow the visual instructions. The classes are free to LCS members. No prior registration is required.

They meet MWF from 3:30 to 6 pm in the Ken Gosh Pavilion.  The classes run until August. 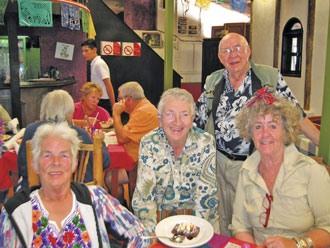 People who show up at Maria Isabel Restaurant (formerly the Old Posada) on Tuesday afternoons enjoy the rush of winning at bingo and they also can feel good about supporting a worthwhile charity, Have Hammer Will Travel.

The event starts at 1 pm when people collect their bingo cards and maybe have lunch. Bingo starts at 1:30 pm. Prizes are donated. They range from a value of 200 to 800 pesos.

It costs 4800 pesos per year to teach a student. Three-quarters of the current students are on bingo scholarships and it’s hoped that eventually the class will be tuition-free.

The shop is located at 231A Hidalgo, in partnership with Todo Bueno Resale Shop next door.  For more information, email This email address is being protected from spambots. You need JavaScript enabled to view it..

LET’S HEAR IT FOR INTROVERTS

This month members of the Ajijic Book Club will read and discuss the book that started the Quiet Revolution: Quiet: The Power of Introverts in a World That Can’t Stop Talking, by Susan Cain. ABC will meet at Just Chillin’, located at Constitution #32, on Tuesday, April 25th at 4 pm.

For more information on membership, open to all, contact John Stokdijk at This email address is being protected from spambots. You need JavaScript enabled to view it.. 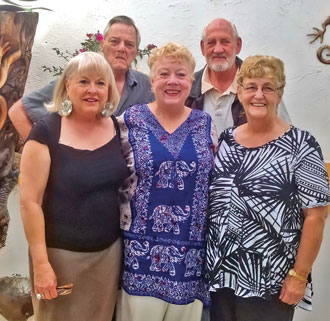 The story: When Peggy’s two adult children take her out for lunch, they quietly begin to take her life apart. With excruciating patience, the playwright lets two middle-aged siblings and their elderly mother lead one another—with the best intentions—to a place where forgiveness, understanding, and even love may no longer be possible.     The show runs April 28, 29 and 30.

Naked Stage is in Riberas del Pilar, at Hidalgo #261, on the mountain side and directly across from the Catholic Church. Reservations are recommended. The new suggested donation is 100 pesos.

WHAT A CASA NIGHT

The Culinary Arts Society of Ajijic donated a dinner for eight at Niños Incapacitados’ fundraising gala last year. The lucky couple paid a record breaking 40,000 pesos at the auction.

On March 1 they were treated to a nine course Moroccan feast. CASA members brought four SUVs loaded to the brim to a stunning home offered for the evening and recreated a table scene out of The Arabian Nights. There was even a belly dancer. 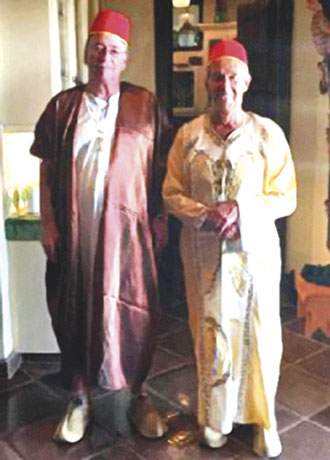 Last month a very special group came to visit Jaltepec Centro Educativo, 55 women of Les Dames d’Escoffier. This is an International  philanthropic organization of women leaders in the fields of food, fine beverage and hospitality.  They came from the USA, Canada and Mexico to visit the school.

They enjoyed a tour of the facilities and heard a presentation on Jaltepec’s history and academic program.  Then they presented a check for 33,000 pesos to the school.  To check Les Dames out further, see their web page: http://www.ldei.org/

Director Linda Buckthorp says, “It has become my passion to see each student graduating, and becoming able to help educate her siblings and raise the economic standard of her family. The school has come a long way in twenty years.”

The Lakeside Garden Guild is a social network supporting community projects that, over the years, have helped the local people as well as beautifying Ajijic. The group has been responsible for graffiti cleanup, presentation and installation of iron benches, and establishment of The International Plaza, a garden of sculptures remembering beloved residents of Ajijic who have contributed to the Ajijic community.

Newly-elected President Georgia Barneburg announced her 2017 Board and Committee Chairmen at a recent Guild meeting. To learn more, check their website:  http://gardenguild.weebly.com. 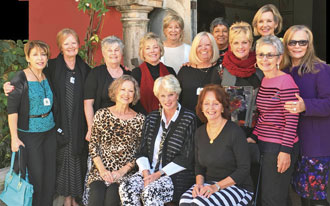