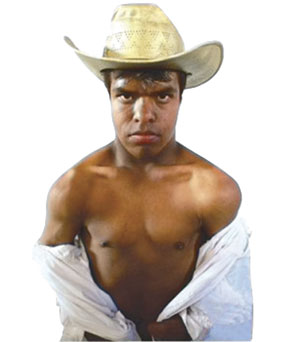 It was so dry in recent years that all of the pregnant women in the Sonoran village of Refugio de María worried that their sons would never grow to be as tall as their fathers. It was because of this they watched with concern the village dwarf, Niño de Dios, walk around Refugio de María on little bowed legs.

His mother, Araceli, had named him Niño de Dios because he was hardly a human child at all, and he was not in any reasonable visible sense her niño, nor the niño of the proud man she had married, a man who had headed north forever only a few minutes after his son was born.

As Niño de Dios grew he was generally tolerated by the adults, and even loved by some, but he suffered as all suffer who are not normal in the way the world demands.

One afternoon, when Niño de Dios was already in his late teens, with the full-sized head of a rather handsome man but with short arms and legs and the body of a dwarf, several of the young men who were strong but undeveloped in their hearts decided to tease him. They began tossing him back and forth like a bale of hay. The young women of the village watched in horror.

Soon Niño de Dios lay in the dust. A few drops of rain began to fall. He gathered himself up and onto his feet and announced to his torturers surrounding him that in doing this they had cursed Refugio de María, and that the rain, so badly needed, would now move on to another village, where a child of God might be better treated. The rain suddenly stopped.

Though his mother was no longer there to help him, Niño de Dios now felt his own strength. Araceli had made the final journey five years earlier. Hopefully, thought Niño de Dios, she was now in that highly desirable section of Heaven reserved for the Mothers of Dwarfs.

That same spring Niño de Dios, around the time of Lent, began dressing up as God, wearing a white robe, a rather clean one at that, and a belt of braided leather. When those undeveloped young men gathered again to harass him, Niño de Dios bounded up the few steps of the little church and announced to the village that he had been born into Refugio de María to challenge them, to test their love for Him, for God.

Blasphemy for sure, but the older villagers warned those young men not to bother him further. The villagers were worried, though, or disgusted, or irritated, or ashamed, and they began to ignore Niño de Dios. Wives who formerly had made sure he had ample food and who gave him a few pesos to run simple errands, no longer opened their doors to him; and husbands, who had formerly helped him up onto their horses—his favorite delight in the world—no longer looked at him.

But certainly the most uncomfortable event in Refugio de María that spring was when Serafina’s beautiful daughter Esperanza, who was as perfect in body as Niño de Dios was not, fell in love with him. Indeed, had his handsome head been placed upon the body of a normal man, the whole village might have been in love with Niño de Dios.

Since he had been a tiny boy, Niño de Dios had often been seen following Esperanza around the village. But now it was often Esperanza who followed Niño de Dios. Every evening, they could be seen on the steps of the church, his head resting sweetly in her lap as she sang to him.

Why Esperanza fell in love with the dwarf was anyone’s guess. Some speculated that Niño de Dios possessed secret powers, perhaps dark ones. Others thought that indeed, he might be a Child of God, a gift to the village. Still others, largely young women, whispered that his manly qualities might extend far beyond his beautiful head.

At any rate, as the angels brushed the earth with their wings, turning it to autumn, one thing was soon evident: Esperanza was pregnant. The husbands (more than one of whom would like to have had Esperanza at his heels) began to gather in the evenings at the Modelorama to drink Sol and to discuss what was the most responsible, and manly, thing to do.

Some said “Kill the little monster, or saint, or whatever he is,” while others, more moderate, cautioned, “Remember, he is, after all, the father of her child, and who else would have her now?” Still others said “Because he claims to be God he should be killed,” to which yet others replied, “But haven’t we always been told to be Godlike?”

The night they gathered together at the plaza to make their final decision, one of the old wives informed them that no one had seen Niño de Dios, nor Esperanza, since dawn.

They couldn’t go far on foot. Had they simply vanished? Had they been set upon by some demented or jealous villager? One of the elders informed them that the only two fine horses in the village as well as the silver communion cup that had served Refugio de María for more than two centuries had also disappeared.

The angels brushed the earth again and autumn turned to winter. Still there was no rain. And no Esperanza and no Niño de Dios. And now it was the Holy Season, and the Fiesta de Guadalupe, and then the nine days before Christmas. Serafina wept as she remembered when Esperanza, as a little girl, had been chosen to play María and ride around the village on a donkey led by a little boy. That had been so long ago.

Now it was Noche Buena…Christmas Eve.

Tonight all of Refugio de María were gathered at the plaza, watching the Heavens and hoping for their return. 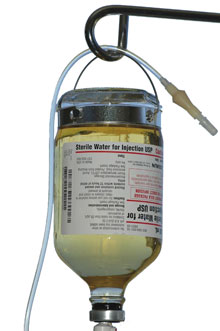 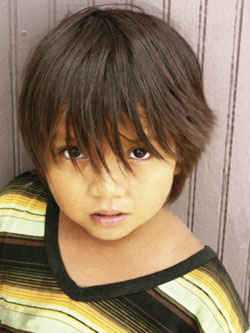 Vaya Con Dios
Vaya Con Dios By Robb Howard   Philippe, Maria’s ten-year-old son, couldn’t breathe. She massaged him as her curandera had taught her and