Nine Tenths of the Law 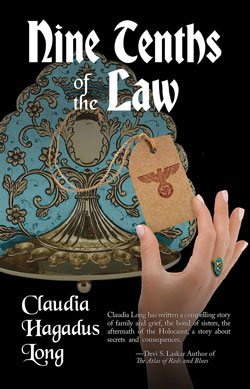 Nine Tenths of the Law is a novel of family secrets, survival, sisters and an heirloom menorah stolen during the Holocaust. This 223-page novel by Claudia Hagadus Long will not disappoint. Instead it will entertain from beginning until the final page.

On page one Zara, one of the story narrators, begins, “... I´ve followed my husband, Sam ... to New York City, I´ve really come... to find my mother. She´s been dead for three years ...” Zara, like the author, is a labor lawyer from the Bay Area. She thinks her husband is having an affair. Her sister Lily lives in a NYC suburb. “Lily´s a middle-school teacher. She´s far taller, far more buxom, vastly more stylish ...” Like many sisters, there is a bit of sibling rivalry. Both sisters are educated but that is the end of their similarities. Their dead mother, the beautiful Aurora, was a teenager when the Nazis invaded Poland and looted the family treasures, which included an enameled heirloom menorah, which turns up in the Jewish Studies Museum in Manhattan.

Aurora never tells her daughters how she survived the war years, but the reader slowly learns how a young woman survives when one is determined to live, “too beautiful to kill,” and intelligent.

When Lily and Zara discover the family menorah in the museum, they scheme to get it back, but find the exhibition has been dismantled. The director, whom Lily later dates, is not who he claims, a number of pieces from the loaned exhibit disappear before being returned to the lender, then the secretary´s partially nude body is found while two suspects have purpose, means and alibies.

This short novel has it all: a ghost, two competitive Jewish sisters, a valuable stolen menorah, a litany of suspects, and a husband who disappears for long periods of time. All that and Nine Tenths of the Law is well written. My suggestion is buy yourself a copy because possession is nine-tenths of the law. Publication date is April 2020, so you probably can´t borrow it from anyone.