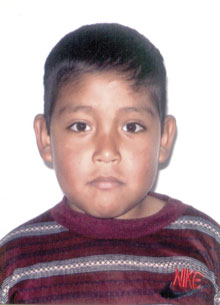 It’s difficult to imagine that this handsome little boy’s life was almost over before it began. Born November 8, 2005, Diego would be diagnosed with Myelomeningocele. His loving parents, mom Silvia Barragan Garcia and dad Cristino Jimenez Cortez, were devastated.

Diego was rushed to Hospital Civil in Guadalajara where he would remain in critical condition for the next two months. Doctors were not hopeful for his survival. Myelomenigocele is a birth defect in which the backbone and spinal canal do not close before birth. This condition is a type of spina bifida.

Surgery is highly recommended to repair the defect as soon after birth as possible. Unfortunately, Diego’s condition was too fragile so an operation was out of the question until he stabilized. Mom stayed with Diego for two months. If she was needed at home, Dad took over the vigil at the hospital.

Diego was being treated with antibiotics and anti-convulsive meds, which at first seemed to worsen his condition but he started to respond positively to the treatment. Diego was fitted with a body restraint to reduce damage to his exposed spinal cord and sent home until surgery could be performed.

Over the next eight months, Diego would be in and out of hospital with numerous infections and bladder problems. He finally had the much needed surgery just before his second birthday.

Mom was referred to Niños Incapacitados and became a client on May 22, 2008. During the interview, we learned that Diego was now experiencing severe orthopedic problems, not unusual for children diagnosed with Myelomeningocele. According to his doctor, most children will require lifelong treatment for problems resulting from spinal cord damage.

Diego had to have daily therapy sessions at the Hospital Civil while undergoing extensive testing including an MRI. He was fitted with a hip brace and shoes to help him walk. Sadly, Diego would have to undergo more surgery.

We have paid for all medications, hospital consults, therapy sessions, transportation to and from the Hospital Civil, X-rays and an MRI. We also paid for all hospitalization and surgeries. To date, Niños Incapacitados has paid out 40,000 pesos.

In March of this year, Diego had to undergo a spinal tap. A special monitor had to be rented by the Hospital Civil for this procedure at a cost of 7,200 pesos.

Having had so many operations, the scarring on Diego’s back had become quite badly inflamed. In June, Hospital Civil referred the family to a Plastic Surgeon for consultation. The surgeon recommended re-opening the surgery site and cleaning the area and re-stitching. The procedure seems to have gone well and Diego is feeling much better. Mom has to apply a special cream twice daily for the next three months, which will reduce the swelling and help speed up the healing process.

At the moment there are no more surgeries scheduled. Diego is very happy about this. Despite all that this little guy has been through, he always greets us with a big smile and a hug.