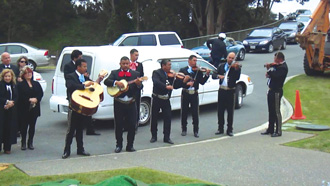 Doña Maria de la Luz Rojas Mercado de Ramirez died Tuesday; because she was not embalmed she was buried the following day. All ten of her surviving children and numerous grandchildren arrived for the viewing. Most of her progeny reside in various parts of the US; only three of her children live in Guadalajara. The ninety-year-old matriarch of this prodigious clan was prepared for her death spiritually, mentally and physically. Although the notice of her demise was expected, the pain and sorrow of her passing was not lessened.

The funeral bus to transport some family and friends departed the mortuary at exactly noon. The procession of cars following the hearse was long and slow. The funeral cortege passed by the home of Doña Luz so that the neighbors who were unable to attend the graveside services could wave goodbye. We arrived at the cemetery an hour after leaving the mortuary.

The Pantheon Guadalajara covers approximately ten square city blocks. A five-piece mariachi band played quiet, but familiar music while we gathered at the entry gates. Leading the procession of mourners, the mariachi began to process up the cobbled road as several of Doña Luz`s grandchildren, took turns carrying the polished mahogany coffin, while we mourners shuffled along the rocky road, while dust rose like beige talc. The mariachi continued to play their music which now sounded like a dirge.

“Oh, my god, I shall never see you again,” wailed an eighty-six-year old sister, herself being supported by two of her adult children. A thin layer of grit covered each of us as we continued to march zombie-like up the cobbled roadway while the mariachi played.

At last, the group of mourners arrived, and we formed ourselves in a semi-circle and stared at the open grave. The mariachi assembled at the head and played another mournful tune. Two open-sided white tarps shaded the grave; we mourners were left to lean against tombstones, while a few women produced umbrellas to provide a minimum of relief from the scorching heat of the sun. Like an apparition, an elderly woman with a black mantilla cascading from the crown of her head and covering her face began to lead the assembly in praying the Rosary. The mariachi provided comforting background music.

Carmen, who had taken care of her mother, rushed to the now opened coffin; her words flowed with sincerity as she thanked her mother for being the guide of the family and especially for giving her the honor to hold their mother when she drew her final breath. Carmen´s three adult children went to the side of their grieving mother, while the mariachi played. The children began to massage their mother´s neck with rubbing alcohol and splashed bottled water on their fainting mother´s face. From across the grave a niece pushed her way to the coffin crying in a loud voice, “Perdoname, tia, por haberte hecho sentir mal.”

As the adult niece petitioned for forgiveness the mariachi fell silent and our attention was shifted to a grandson, the size of a gorilla, a tattoo of rattlesnake fangs open and ready to strike wound its way down the bulging bicep of his right arm as he stormed over to the gravediggers who were playing cards. A few well-spoken words and respect was restored. The mariachi picked up where they left off and a swirl of ghost dust rose from the dry ground.

As Doña Luz´s coffin disappeared into the dry earth alongside her husband and a son, the mariachi played the last mournful tune, “Hay que morir para vivir.” (We need to die so that we may live.)