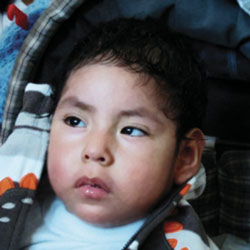 You first met Joaquin in August 2013; this is his follow up story: Joaquin was born in December 2010 and diagnosed with West Syndrome. This is an uncommon epileptic disorder in infants named after an English Physician.

The syndrome is age-related, generally occurring between the third and twelfth month and generally manifesting around the fifth month.  There are various causes but often it is an organic brain dysfunction whose origins may be prenatal, perinatal (caused during birth) or postnatal.  Statistically, boys are more affected than girls. Joaquin was diagnosed in his fifth month.

Joaquin spent the first year and a half in the hospital. Doctors were trying desperately to control his “jackknife convulsions”.  Research indicates that spasms tend to occur upon awakening or after feeding and often occur in clusters of up to 100 spasms at a time.  Infants with this diagnosis may have dozens of clusters and severalhundred spasms per day.  Sadly Joaquin falls into this category.

Joaquin came to Niños Incapacitados in July of 2012.  During the initial intake, we learned that once the doctors were confident with their diagnosis and came up with a cocktail of anticonvulsive medicines, they decided it was time for Joaquin to go home.  It was generally felt that the family could provide better care for Joaquin. They provided the family with a hospital bed and all the paraphernalia needed to care and feed Joaquin. Mom was instructed on proper feeding and medicating techniques.   Due to the number of spasms Joaquin has throughout the day, at present these are occurring every fifteen minutes, all feeding and medicating is done through a drip bag hooked up to his bed.

Given Joaquin’s erratic movements coupled with the aggressive convulsions, all agencies that could have helped declined saying they could not be responsible for him. The family was left with no choice but to hire a private therapist. Niños Incapacitados was unable to reimburse the family for these treatments as the therapist did not have valid government facturas.  Mom & Dad however said they were happy to pay themselves as it provides a much needed respite for the family.

In August 2013, the family sought out a new physician who came highly recommended.  He suggested a change in medicines to that of a herbal treatment as an alternative to the cocktail he was presently forced to take.  Joaquin responded immediately and very positively.  The family was ecstatic.  Joaquin’s seizures were reduced to two a day and sometimes only every other day.

Whereas up to this point he was completely bedridden, he now sat up in a specialized chair giving him a new glimpse of the world around him.  His siblings started a regime of daily exercises which he enjoyed immensely.  Mom said he looked forward to their return from school. The doctor was confident that if Joaquin continued to progress as well as he was, the feeding tube could be removed and feeding could start by mouth. The family was encouraged to keep working with Joaquin to build up his muscle tone.  With the help of a customized jogger’s stroller Mom was able to take Joaquin out.  Something she had not done since his birth. Joaquin continued to improve month by month. Mom was elated when she told us of Joaquin trying to speak. She said they will take one day at a time and see where it leads.

Compared with other forms of epilepsy, treatment of West Syndrome is relatively difficult and the results of therapy often dissatisfying. Statistically, 5 out of every 100 children with West Syndrome do not survive beyond five years of age.

Sadly Joaquin died in December at home with his family.  He had just turned four. Mom said he took a couple of very big breaths and was gone.  However sad the family feels they are so happy to have seen Joaquin enjoy life for the past fourteen months.