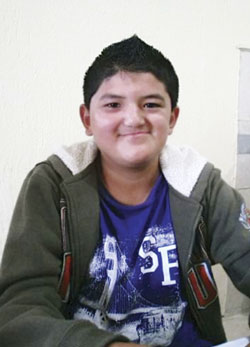 Please meet Gerardo, who lives in Chapala with his parents and a younger brother. Gerardo is 13 years old and a typically active teenager—who also happens to be an excellent student.

About 10 years ago Gerardo developed what is called odontogenic myxoma of the maxilla---in other words, a non-invasive tumor in his left upper jaw. These are usually benign tumors and quite rare in people under 20 years of age, but Gerardo’s tumor developed at age 3 and began to cause distortion and distension of his left upper jaw.  Perhaps you can tell in the photo that the left side of his face looks “higher” or more swollen that the right.  This was due to the invasive nature of a neoplasm (typical in cases of maxillary myxoma) which did, unfortunately, became cancerous.

Gerardo’s mother has been diligent in the care of her son, and both she and Gerardo understand very well the nature of his illness. When Gerardo was enrolled with Niños Incapacitados, his mother had a job through which she was eligible for IMSS (Mexico’s National Health Service), but she was responsible for the payment of the yearly premium since she needed to add Gerardo to her policy.

Thus, Niños Incapacitados has paid the insurance premium for the family because not paying it would have cost us much more every year in payments for Gerardo’s chemotherapy treatments, as well as an operation just this past year to reconstruct the gum.  He will have to undergo a couple of other surgeries in the next year or two in order to help align both sides of his mouth. Hopefully these surgeries, too, will be successful and Gerardo can work on improving what is already a beautiful smile.

If you would like to meet other children being helped by Niños Incapacitados, please attend our regular monthly meetings on the second Thursday of each month in one of the meeting rooms at the Hotel Real de Chapala in La Floresta.  Coffee and cookies at 10:00, meeting at 10:30.  Bring a friend.  You will learn how you can volunteer in many different ways and how your monetary support helps so much to assist needy families whose children suffer from a chronic and/or debilitating illness or condition.